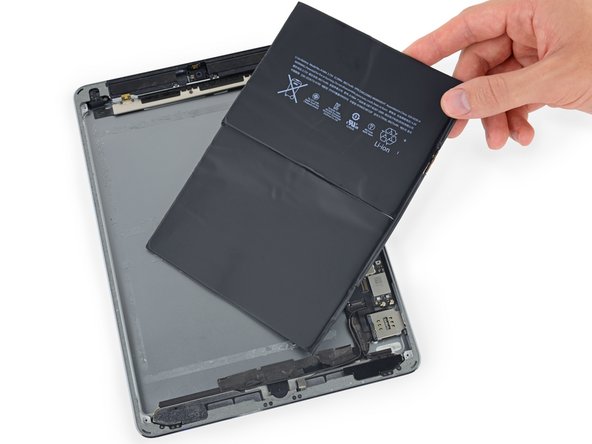 Use this guide to replace an old or failed battery that no longer holds a charge, and bring the life back to your iPad Air LTE.

Before you begin, drain your iPad's battery below 25% charge. This will minimize the risk of a dangerous thermal runaway in the event that you accidentally puncture or deform the battery.

Lithium-ion batteries contain dangerous chemicals and may catch fire and explode if punctured or mishandled. Use caution.

The guide says that it is Potentially Dangerous. What is potentially dangerous about this fix?

Nothing other than what's mentioned in the intro and instructions: this is a soft-shell lithium ion battery, subject to leaking toxic fumes / catching fire / exploding if you accidentally puncture or deform it too aggressively. The same is true of all batteries of this type. Treat it with respect and take appropriate precautions.

What about the adhesive? Do you need more to seal it up or do you reuse the existing?

You should clean the old adhesive from the glass and chassis using isopropyl alcohol, and replace the adhesive using pre-cut adhesive strips.

Very good guide, completed without any complications, thanks a bunch :)

Ok. Will Coconut battery show zero load cycles if a new battery is build in or are the loadcycles remembered in the iPad?

Nice replacement guide -.- , this is just disassemble the battery. How on earth i put a new battery in without removing the logic board first ?

Pretty much the same way it came out—you can slide a plastic pick underneath the battery connector to lift the logic board very slightly if you need more clearance. It doesn’t take much.

Very helpful, worked for disassembly and installation of replacement.

If you use a blowdryer to heat the back, you can remove the battery more easy. They won’t deform as much as they would in the described method, which assumes that you are going to install a new battery pack. However, many people have two broken devices that they want to turn into one working unit, as it was the case with me. So you‘ll want to avoid severing the battery that‘s good from a device that has, say, a broken screen. Be gentle, don‘t use excessive force. It works without bending the battery. Before transferring the battery, lay it on a straight flat tabletop an flatten out any wobbles and dents you made. Then reseat it in the new device.

I wouldn’t try to re-use a soft-shell lithium-ion battery that was glued down and then pried out—no matter how little you deform it, it’s a potential fire hazard. Not worth the risk in order to save $35. If your goal is to combine two devices, leave the good battery glued to the chassis and transfer over everything else.

I always use goo gone on my credit card. I Apple some goo gone to a paper towel and rub a small amount on the edge I am wedging under the battery. Reapply every time you take out the card. Clean the case with rubbing alcohol to remove any oil after the battery is removed.

Very helpful instructions. All came apart and went back together. The hardest part was getting the glue to soften enough to get the iPad apart. My question is, why does the battery show 70% and charging. Won’t charge over 70%. Your suggestions/guidance would be most appreciated.

This is probably because the new battery isn’t properly calibrated. I’ll add that missing info into the conclusion.

My first successful repair! The batteries were swollen to high heck, and at one point in removing them, I accidentally popped one of them, releasing an acrid smelling smoke and a flash of fire. Luckily, I had a bucket of sand that I threw it in. Other than that hiccup, everything went exactly as planned. Thanks Scott, great guide!

Used this guide to save time, because our Dozuki guide would have had me doing a complete tear down. I get it, less risk of breaking the motherboard. It does take a bit of finesse to wiggle the old battery out. Thankfully this guide helped, and between some heat and alcohol the battery came out without any trouble at all.

very good up to the last step. The standoff is a real pain. Should mention the tool in the kit which is a plastic pry with a slot in the middle cut out. probably intended for this step., didn’t realize until after I was done. Should include a step or two on how to put in the new battery.

The guide is very good, also the exchange of the battery is quite complex. The only point I struggled, was the reinstallation of the battery, since the removed battery had not a full drilling hole between the contacts.