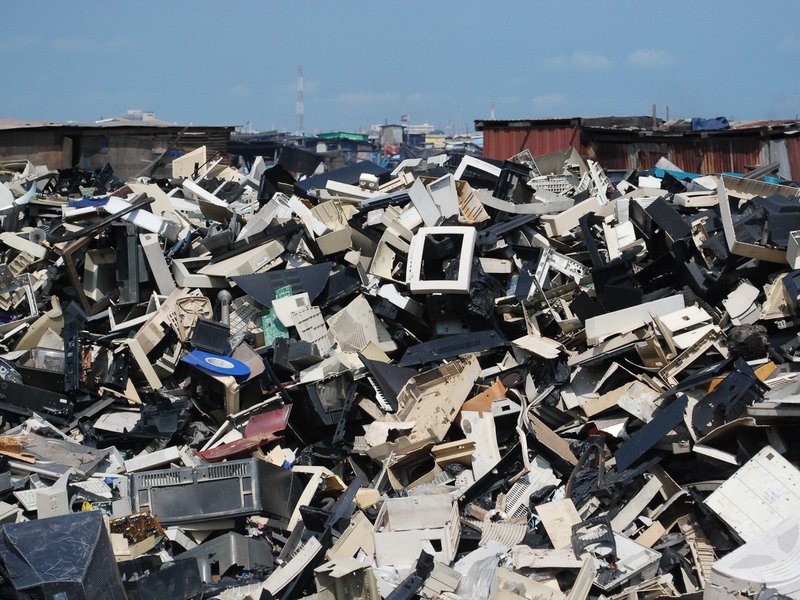 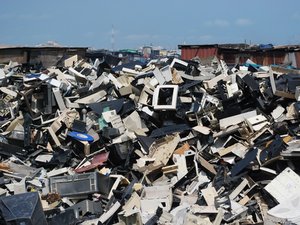 How to Recycle End-of-Life Electronics

Repair is better than recycling—but even repair makes electronic waste. Recycle it.

The world generates over 50 million tonnes of electronic waste (e-waste) each year. But worldwide, we're recycling just 12.5% of the e-waste we generate, and no country in the world recycles even half of its e-waste. When e-waste ends up in the trash, it can harm water and wildlife.

For instance, in the Korle Lagoon near an illegal e-waste dump site, copper was found at 66 times the safety threshold. Copper is toxic to many invertebrates and can damage gills, kidneys, and other organs of most fish. People living in areas with high e-waste dumping have heavy metals in their bodies at rates that indicate susceptibility to cancers, neurodevelopmental disorders, thyroid dysfunction, and DNA damage.

Repair is better than recycling, for reducing the amount of e-waste we generate and for conserving the materials and energy that go into electronics manufacturing. Keeping our phones an additional year on average would be the carbon equivalent of taking 636,000 cars off the road.

But repair still makes e-waste, in the form of cracked screens and dead batteries. Those dead parts should go to an electronics recycler, not be put in the trash. 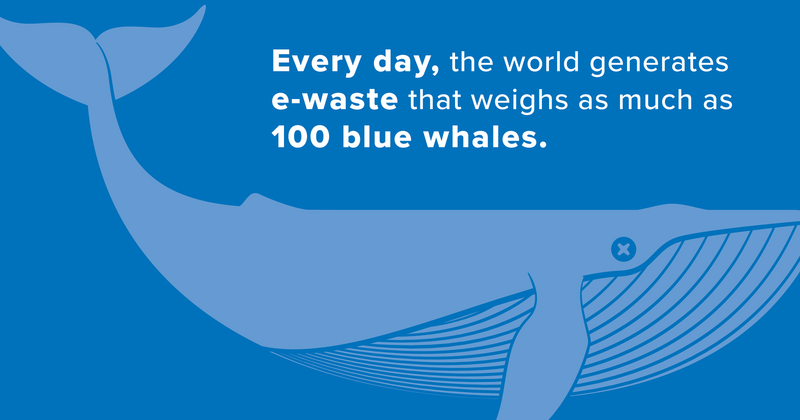 Give Your E-Waste to a Certified Recycler

Electronics recyclers can recover many of the materials inside electronics. There is 100 times as much gold in a ton of cell phones as in a ton of gold ore.

A lot of big box stores take back e-waste, but beware: Several of them have faced lawsuits for improperly disposing of e-waste and other hazardous materials. Finding a drop-off location via a recycling organization like Call2Recycle helps you make sure your e-waste won’t end up in the trash.

We've collected links about e-waste recycling options and laws around the world below. If you see a broken link or have information that's not listed, feel free to edit this page directly (it's a wiki!) or leave a comment.

How to Recycle Rechargeable Batteries

Changing a battery is one of the best ways to extend the life of your devices. But it's especially important that you don't chuck spent lithium-ion batteries into your household recycling bin.

Batteries have specific handling requirements, which means that not all e-waste recyclers take them. Confirm that your recycler takes your type of battery before leaving it in a drop-off location.

Skip to recycling locators to find an e-waste recycler near you:

What If My Battery Is Swollen? 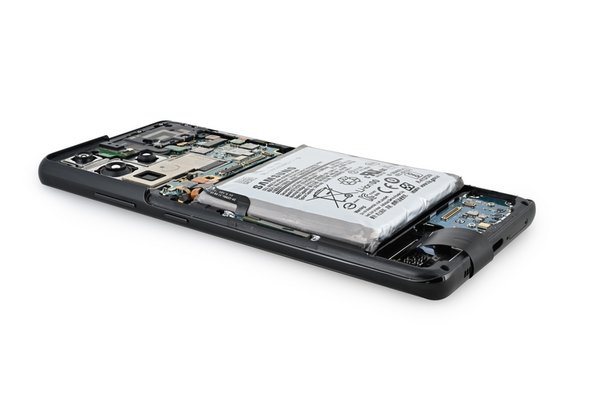 Generally, batteries are pretty safe. You’re far more likely to be struck by lightning than experience a lithium-ion battery catching on fire.

But you’re at higher risk if you work for a waste or recycling company. These facilities have compactors, shredders, and other machines that break stuff into more manageable pieces. If a battery gets caught up in a shredder or compactor, it can break open and start a fire. Waste facility battery fires are up 38% since 2017, and 90% of recyclers’ fires are from lithium-ion batteries.

If lithium-ion batteries make it to a landfill, that’s bad news: They can leach heavy metals (such as cobalt, copper, and nickel) and dissolved gasses (such as sulfuric acid) into the soil and nearby waterways.

What Should I Do with Single-Use Batteries?

The US Environmental Protection Agency says that alkaline and zinc-carbon batteries can usually be safely put in the trash. However, some governments have laws against throwing single-use batteries in the trash. Regardless, if your local waste authority collects them, recycling is best—for materials recovery, for conserving energy that goes into mining and manufacturing, and for keeping potentially hazardous materials out of the trash.

Visit Call2Recycle to find a battery take-back location or get a shipping label. Via its mail-in program, Call2Recycle takes rechargeable batteries, single-use ("primary") batteries, cell phones, and e-bike batteries. Its partner locations may take some or all of these things.

The United States of America does not have a national e-waste mandate. However, individual states have passed state e-waste laws. The list below is a community-built list. If your state isn't listed below, don't assume there's not state e-waste law for you to follow.

As in the EU, UK retailers must take back e-waste. You may also take e-waste to a recycling collection facility:

Batteries, cells and lamps can in many countries be returned in collectors in supermarkets and a large number of small retail stores.

UK retailers need to take back used WEEE, and UK repairers and refurbishers of WEEE may need a pollution, prevention, and control permit.

Call2Recycle.ca has a national recycling locator for Canada. Veolia also has a prepaid mail-in battery recycling program available to all provences.

You can find details about e-waste management on a per Provence level on this site.

India is the world's third-biggest contributor of e-waste, after China and the US. Despite attempts to regulate e-waste, much continues to be imported into India and informally recycled in hubs like Seelampur.

Seelampur demonstrates some of the challenging balances of e-waste collection schemes: Currently, 95% of India's e-waste is processed by informal, illegal waste pickers, an incredibly high collection and processing percentage. The economy in Seelampur is so dependent on the processing of e-waste that even though pollution makes the skies gray and workers often die of respiratory problems, locals are reluctant to disrupt the status quo. Changes to the system will need to weigh the lives and livelihoods of the informal waste picking network against the benefits of modernizing e-waste recycling in India. Ideally, governments will find a way to leverage the informal network's incredible collection rates and integrate the informal workers into the developing formal recycling system.

Today, there are a few dozen formal e-waste recyclers in India (see lists below). In February 2022, the Delhi government announced plans to build the nation's first e-waste recycling park in the Narela industrial area.

According to the United Nations,

Asia is the largest consumer of electrical and electronic equipment [EEE — anything with a battery or a cord], buying nearly half of EEE put on the market. Asia as a whole not only accounts for the majority of EEE sales, but also generates the highest volume of e-waste—estimated at 16 million tonnes in 2014. However, on a per capita basis, this amounts to only to 3.7 kg per inhabitant, as compared to Europe and the Americas, which generate nearly four times as much per capita — 15.6 kg per inhabitant.

With growing incomes, consumers in Asia now replace their gadgets more frequently. In addition, many products are designed for low-cost production, but not necessarily repair, refurbishment or easy recycling.

Despite these formal steps, enforcement of these measures remains a significant challenge in these countries and many others around the globe.

Brazil is the leader in the production of e-waste in Latin America (and second in the whole American continent) and has national solid waste legislation from 2010, the "Política Nacional de Resíduos Sólidos." It defines the principles, goals and instruments related to the comprehensive and solid waste management (federal district, each federal state and the municipalities have to cooperate with the union in order to implement the established in the law): http://www.planalto.gov.br/ccivil_03/_at....

According to the Global E-Waste Monitor 2017, Brazil had 1.5 Mt of e-waste with only 3% adequate collection.

There are waste collection companies and waste picker cooperatives working in a non-profit model that also offer e-waste collection. Here just a few of them:

For a long time, Africa was positioned as the "dumping ground" of e-waste, where waste producers from the Global North would send dead electronics, to the detriment of waste picking children. The Ghana scrapyard Agbogbloshie has been demonized in these reports.

However, as African consumers have become more able to purchase new technology, electronics manufacturers have jumped to meet their needs (dominated by Transsion branded smartphones). Today, 50-85% of African e-waste comes from within the continent.

Africa generates 2.9 Mt of e-waste a year and recycles 0.9% of that formally. However, as of 2020, 13 African nations have some sort of national e-waste law. By some estimates, informal recycling and reuse in Africa is more complete than on other continents: As much as 95% of electronic waste in Ghana is collected, mostly informally.

FYI: The link for your e-scrap price guide no longer works.

Thanks for pointing that out. We're unable to find a different resource at this point. If anyone has a good link, please add it to the page!

The post above could use a bit of repair (reads: update) of its own.

The 3rd-party certification(s) mentioned above assure nothing. Here is an example of why I say that. Total Reclaim, once the largest electronics recycler in the PNW was also the most certified (R2, e-Steward, ISO, all 3) at the time of being caught breaking the law. Total Reclaim is not the only example of electronics recyclers holding one or both 3rd-party certifications violating either the certification guidelines and/or the law in general.