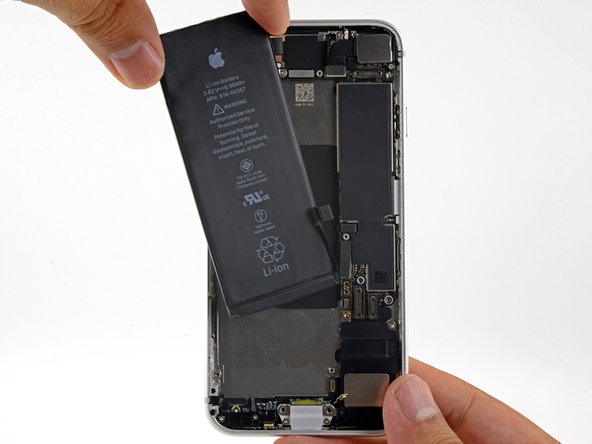 Use this guide to revive your iPhone 8’s battery life and performance with a new battery. If your battery is swollen, take appropriate precautions.

This guide instructs you to completely detach the display assembly. This is intended to prevent accidental damage to the display cables. If you feel comfortable removing the battery without putting undue strain on the display cables, you can skip the steps for detaching the display.

While it’s possible to remove the adhesive strips securing the battery as soon as you open the phone, the written guide strongly recommends first removing the Taptic Engine. Pull-stretch adhesives are designed to be pulled at a shallow angle. Doing so reduces the risk of breaking the lower adhesive strips accidentally, either by snagging them on the Taptic Engine, or by pulling the strips at too sharp of an angle.

For optimal performance, after completing this guide, calibrate your newly installed battery: Charge it to 100% and keep charging it for at least two more hours. Then use your iPhone until it shuts off due to low battery. Finally, charge it uninterrupted to 100%.

I still did it in 30 minutes….but I am glad I stop repairing phones around the Iphone 6s ! Now it takes serious effors just to replace the battery !

One note on this repair: When reinstalling the standoff that connects to the Taptic Engine, I found that the pointy tip of the spudger fits really well into the little hole at the top of the standoff, and helps with getting it into place and screwing it down if you don’t have a screwdriver bit for the standoff. Hope this is helpful!

Are steps 18 to 27 really required if you’re just replacing the battery?

The pull-stretch adhesive holding the battery has a tendency to tear when they are pulled at a steep angle. When they tear, removing the battery becomes much more difficult. We strongly recommend removing the Taptic Engine in order to give the adhesive the best chance of coming out in one piece.

I tried doing it the ‘easy’ way without those steps. I wound up breaking the top adhesive tabs and it made it a lot harder to remove the battery and took a lot of extra time. If I had to do it again, I would do all the steps. Otherwise, things went very well. Very good instructions.