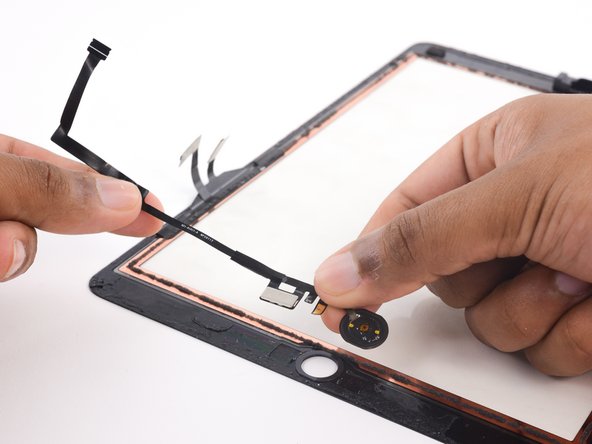 Follow the steps in this guide to replace the home button assembly in an iPad 6 Wi-Fi.

This guide can be a little subtle when compared to actually doing the home button repair. Here are some troubleshooting tips from what I've learned about doing these:

First, when removing the home button itself, I do NOT recommend pushing the button up through the screen as shown here unless you're certain it will adhere properly to the gasket on the new/ same screen. Alternatively, after you have removed the bracket holding it in place, heat the display around the home button and slide a pick and gently remove the paper gasket WITH the home button still attached, then move the entirely assembly. Go slow and use about a minute of 85c heat on a plate / get it hot enough that the adhesive gives, just under where it tolerable to touch but no more.

If you have moved the button and bracket but can't get it to click, first check the alignment. There is a small metal nub on the bracket's underside; this needs to meet the part of the button that actually “clicks" when you press it, otherwise the button will not work…

The bracket does NOT sit dead center over the home button but is sightly higher than it. You may need to place it a few times before you get it settled correctly.

The bracket adhesive can lose stickiness, especially if you move it multiple times; in this case you will have to either replace it or add some glue. This is important as if the bracket fails in any way, your home button will fall into the device or at the very least become unusable. A little dab of Jewelers glue on each bracket side followed by about ten minutes under compression can keep it on without raising it too much with red tape (which can make it sit too high and make it unusable if not heated to cure correctly). Also although tempting, once you have applied new adhesive, leave the button alone for awhile to allow it to cure; do not try and “test" it while still wet as you'll push the bracket loose and have to redo the whole affair.

How does the gasket attach? This whole thing ive actually gotten lucky. I didnt know these things are this strong.

When reattaching the home button bracket, I’ve found it works well to clean the old adhesive from the bracket, then apply a small amount of Goop (soft cure adhesive) to each tab, then use binder clips (paper clips for multiple sheets) to hold the two bracket tabs firmly in place while the glue sets over several hours. By using the binder clips, you can jockey the bracket around to perfectly align the actuator tip over the home button clicker before glue sets.