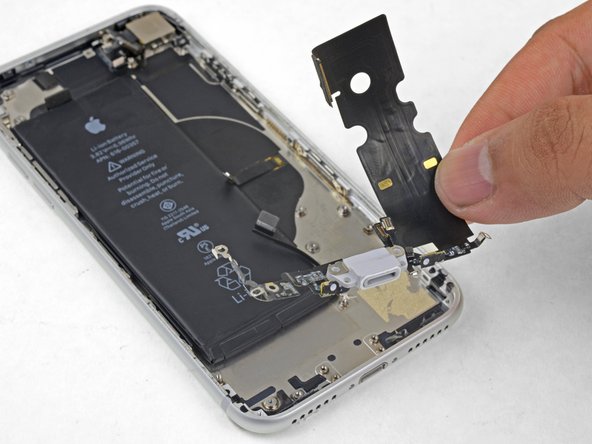 Compare your new replacement part to the original part. You may need to transfer remaining components or remove adhesive backings from the new part before installing.

To reassemble your device, and follow these instructions in reverse order.

Compare your new replacement part to the original part. You may need to transfer remaining components or remove adhesive backings from the new part before installing.

To reassemble your device, and follow these instructions in reverse order.

I love how you mention the “antenna converter cable” twice but never show what the &&^& that part even looks like??

Sorry about that! It’s actually shown in the 3rd image in the last step. I cropped the photo so that it’s zoomed in more to show it.

I would HIGHLY recommend not attempting this fix. I have done a variety of repairs on iPhones (screens, batteries, etc.) and decided to try this to address a broken microphone. I could make regular phone calls but couldn’t use speakerphone or FaceTime. After replacing the lightening charger using the instructions and the iFixit parts, I still can’t use the speakerphone or FaceTime function. To make matters worse, my phone won’t charge through the lightening connector, won’t wirelessly charge, and people can’t hear me even when I make a regular phone call anymore. In other words, I started with one fairly minor problem and, due to this repair, have a whole bunch of new (much more significant) issues. Don’t make the same mistake I did.

Don’t know about the charging issues, but the reason replacing the microphone didn’t help is because you replaced the wrong microphone.

- One for regular phone calls - which is the one you replaced

- One for the back-facing camera

It the port paired to the phone? like Touch ID, or can you just replace it without and issue?

The port is not paired to the phone.

Phone doesn’t turn on. Is there any other tips??

You can try some common troubleshooting tips. Hopefully that will resolve the issue. If not, please browse and post on our Answers forum.

Excellent guide. Took just over 1 hour to complete, phone charges and earphones work again. This is my daughters phone so she is very happy.

Im having an issue where whenever i attach the lightning cord connector the screen wont turn on but when i detach it the screen will turn on, is there anyway to fix this?

Repair completed using this guide and the iFixit kit. Took me quite a bit longer than 2 hours (I spent almost an hour making sure ALL the old glue was off before fitting a new seal!) but with the help of the magnetic project board the job went perfectly and I can now charge my phone again. Speaking of the project board, I would consider this an absolute essential to complete this job. The phone has to be pretty much taken apart and you end up with a multitude of differing length/type screws which are easy to mix up….and it’s not that easy to tell a 1.2mm screw from a 1.3mm screw!

Does anyone know where I can get the small “antenna converter cable”? Sadly, mine broke and it’s seems to be near impossible to just get the converter cable…I know that the wifi works without it, but I’d rather replace the broken thing…

Thank you for putting this together. The Youtube videos are so fast, you really need the pics and instructions. It was greatly appreciated!

My charger port still does not work, even after a replacement. ••Sad••

Great Guide though!! Even remembered the teeeeenie tiny antenna. LOL!

Well, this was by far the hardest repair I’ve ever done. (I’m pretty comfortable with these types of repairs and have done 4-5 screen repairs and home button replacements.) It took about 5 hours. (I had a few mishaps where something was reassembled under something else and I had to take it back apart to get it to seat correctly.) I managed to sever the taptic feedback engine ribbon cable and I couldn’t get the antenna back in, but my phone still seems to make and receive calls with decent signal, use WiFi, and use cellular data, so I’m not exactly sure what that does.

So, TL;DR, the phone dropped in water and wouldn’t charge. Now it does charge, but the haptic feedback on the home button doesn’t work, and I’m guessing it won’t have as strong a signal due to the antenna loss. But it was probably worth it for a ~$20 part instead of replacing the phone for ~$200.

I’ve done a number of iPhone batteries, screens, and even other lightning connectors. This repair is a big job, with almost all of the phone components being removed to replace the lightning connector board. This was also my first iFixit repair that was unsuccessful. At the end of about 5 hours of work and troubleshooting, I was left with no use from the lightning connector, no cellular signal, and a phone stuck in a reboot cycle. I am relatively confident in my work and reassembly and it was quite possibly a faulty part—but at the end of the day I was at a point where I can’t wait days and days for replacement parts to further troubleshoot.

Instructions on this were mostly clear, though there are gaps in the reassembly as there are no specific photos or written directions for the replacement screens and seals around the microphone/speakers/etc. You can see how the old parts were installed, so not a big issue.