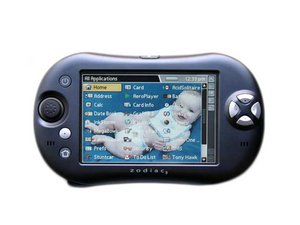 A multimedia PDA sold from 2003 to 2005 that was designed to bring a gaming experience to the PDA market.

The Zodiac 2 is a multimedia, handheld device which displays high-quality videos and pictures, plays MP3’s, and is compatible with Palm OS video games. The Zodiac 1 and Zodiac 2 were released in October 2003 by a private company named Tapwave, Inc. Combined, the Zodiac devices sold less than 200,000 units which lead to its discontinuation in July of 2005. This device was given great reviews and received dozens of awards which is why there are little to no customer complaints about this product.