How to transfer HD files from fried MBP to brand new MBA? How to? 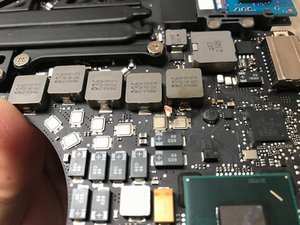 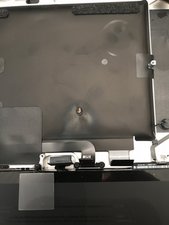 So after figuring out that the cost to repair this myself with the help of the people on this site was going to cost 50%or more of the cost of a new one, I've decided to buy another Mac.

I just bought a brand new MBA 13". She is a photographer and had a lot of editing programs along with pictures on her MBP. I'm not sure she ever backed up her HD with Time Machine or anything like that (we are not very techy people).

What is the procedure for getting those programs and files off the MBP HD and putting them on the new MBA?

I have already taken the MBP HD out. I still do not know if the HD survived whatever caused the Logic board to malfunction. The suggestions have been that the HD is probably fine.

When buying the new MBA I also picked up a Western Digital My Cloud. I currently have a USB External that my wife has used to transfer files and photos from the MBP HD over the years as it filled up.

What are my options? I do plan on buying a SATA to USB or an External case for the MBP HD whichever one is needed so that way My wife doesn't loose her valuables. I'm just looking for a guide on how to accomplish this from start to finish.

I should mention that the Adobe Photoshop programs and Microsoft programs that were on the MBP were bought and downloaded online from their websites and not disks.

You shouldn't have any issues here! The only small issue your likely to have is the new MacBook Air's storage is somewhat limited as it has a smaller SSD drive than what your MacBook Pro had. So you'll be limited on how much 'stuff' you can copy over. Keep in mind you what to have 1/4 to 1/3 of the drive unused so your photo/video editing programs have some wiggle room (the larger amount for 128/256 GB drives).

OK before you start you'll want to off load what you won't need from your old HDD. Using your MacBook Air connected with your old HD via the adapter or case (see below for more on which to get) off load to your other external drive or your WD iCloud drive. We do have a small wrinkle here! Your MacBook Air does not have an Ethernet port onboard! You'll need to get either an Apple USB Ethernet Adapter or Thunderbolt to Gigabit Ethernet Adapter. As we want to have access to the old HD you should go with the Thunderbolt dongle as we need to use the USB port of your old drive. You can then connect directly to your iCloud drive then. After we moved the files around you can then connect your iCloud drive to a hub off of your WiFi AP (cable modem) so you can then go wireless. For now the direct connection is faster and easier for the massive amount of stuff we are moving about.

So on your drive make a folder for your wife stuff and copy it all over as we don't want it on the old drive for the next step. Make sure its all copied over! As you'll need to delete it off your old HD (delete the files in the trashcan). Once you've done that the next step is quite easy! Using the unpassworded user account launch 'Migration Assistant' It will allow you to copy off your user accounts, apps and data from the old drive onto your new system. Here's a set of good write-up's on using it:

When you restart your MacBook Air under your wife's user name everything should be as it was on her old MacBook Pro! Of course minus her work.

You'll need to re-enable the apps with their license keys and/or log into the Apple Store to enable the apps. As for having more storage I would recommend getting a portable USB drive like the Samsung T5 SSD I have a few now and I have to say their fast and very portable! They connect with either a USB-A or USB-C connection to your Mac which gives you some future proofing.

OK last issue which way to go with your old HD use the SATA to USB adapter or an external case? If your wife needs to cut expenses and wants a portable drive (instead of getting the SSD above) then getting a case here does make sense! But keep in mind this is an old drive so its days are numbered and bouncing the drive could cause it to fail (unlike the SSD). Here's the two methods:

@danj This is great and very detailed! Thank you for the time.

I have gone ahead and already purchased a HD case that should be arriving tomorrow, I have also already set up both the new MacBook Air and the WD My Cloud Home 4TB. (I'm assuming this is what you were referring to when you where typing "icloud drive", but just want to make sure;) I also started AUTO backups of pictures and videos from our iphone's to the My Cloud Home (MCH). (Another issue i'm having in itself...SLOW.) I also started and then stopped a TimeMachine Backup from the MBA with its location being the MCH just to see the process.

Note: MCH is connected via Ethernet to my router since that's the way I had set it up.

So I'm thinking I need to go ahead and restart all from scratch. I got a little tech happy and started messing with things before getting any answers to my questions!

I'm going to get started on this procedure you have laid out for me once I received the stuff I need and will get back with you WHEN I need help! lol

Maybe you have some remarks on what I have already done? Or is it just better to go ahead and delete and reset everything and start again from the beginning?

Also with that Thunderbolt dongle, I'm assuming I will need to pick up a RJ45 patch cable to fit that dongle? The Ethernet cable i received with the the MCH appeared to be just what I call a normal Ethernet cable connectors.

However I do have 2 USB inputs on the MBA. One USB port for attaching the old HD inserted into a SATA/USB case and the other with a USB/Ethernet adapter for connecting to the MCH. Would that work so I can skip buying a RJ45 connector cable? Or is the Thunderbolt/gigabit adapter with RJ45 connectors the way to go?

BTW: with the MCH plugged into my router I am receiving the full 1000/mbps accompanied by the solid green LED. If that matters.

Ha, Yes! I did mean your WD drive sorry if I confused you ;-}

Well... As far as what you've setup for user accounts I think it does get a bit messy having too many accounts. Surprisingly, I have four accounts and I don't share my system! I do this to help me protect my self. Let me explain, I have a dirty account for web surfing and doing things that don't require credit card or banking info. I have an account just for online buying and a different account for banking. And lastly, I have my Admin account to install and manage my OS & Apps. This level of isolation is ideal! Of course you likely don't need to go so far. But keep it as a framework on what we really should be doing! Think of it this way this isolation of sensitive data makes it less likely to be compromised. The Admin account is the only Admin user account.

Ok, here we need to look at what accounts you now have and what their purpose is. I assume you thought you needed to redo them on your MacBook air. For now leave them just don't save anything as you'll need to wipe them if they are the same names as what your old HD had. Review the docs I linked to get an idea on what happens when Migration Assistant see's two exact names.

As for the lack of speed this is the limit of the connection over WiFi you are facing. It's not the limit of the Ethernet connection to the cable modem/router (WiFi Access Point - AP) to your WD storage system. Yes, NAS's can be slow as the processing they have maybe limited. But I don't think thats the issue here.

Using the Ethernet Dongle to connect directly to your NAS (WD My Cloud Home) is the fastest connection. Using the Thunderbolt connection Vs the USB is still better even though you can support two USB devices. This gets into how your system is architected. Think of it this way two parallel roads Vs two that intersect. Which offers more throughput? This is the difference between using two different I/O types and two of the same (given the fact the data is flowing across both I/O's).

That's a very thoughtful setup. I will think about setting her Mac up like that as well. I like the thought process of that.

Yes, I did assume that I just needed to setup the new Mac with new accounts like I have done in the past. I have never migrated information from on computer HD to another. The only the I have ever done is move information from one HD to my older USB Western Digital External HD (which I plan to plug into my new WD MCH system when we are through with this process so I can pull from that USB HD wirelessly as well for a total of 7 TB of total storage, not counting the two laptop HD's) I will review those docs again.

And yeah I havent tried to transfer anything to the MCH wired which I knew would be faster. I have noticed they are lacking in the ios mobile app platform for this system but hopefully it will get better. I was just surprised how slow the auto backup from our iphone's were moving granted: 2700 files from my phone and 18,000 from the wife's phone processing at the same time.

My concern would be how well the data is locked down by Apple's proprietary HD formatting methods.

Your Sata to Usb idea is perfectly fine for windows computer, not sure if Apple would have driver support for that, but no reason to think they shouldn't, so you may want to buy one to try it out.

I suggest searching for any guides about expanding your Mac's storage abiliety. If the tricks used for such guides (such as a simple exsternal hard drive using the SATA to USB thing) work, then there is no reason to think such tricks won't work for your situation as well.

If you actually want to transfer the data to the new hard drive, and the SATA to USB doesn't work, you are going to need another computer that supports multiple HD and allows you to swap data around. Mac computers are expensive, and the most expensive actually allow for this kind of support, so it is unlikely that you may have one near by. windows computers can do this because their builds aren't as refined as macs, but then it becomes an issue if the windows computer can handle the movement and handling of apple formated data.