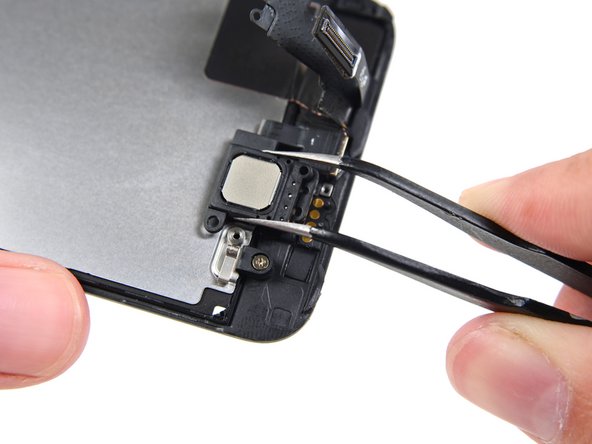 Use this guide to replace a broken front panel earpiece speaker in your iPhone SE.

This earpiece speaker is compatible with the iPhone 5s speaker.

So I’ve replaced my screen in my SE once after buying it second hand, and would like to start flipping phones; that part doesn’t really matter.

In step 17, the right hand side for the viewer is sticking up a bit higher than the left hand side. My phone hasn’t been dropped since I replaced the screen, but there is a massive crack where the earpiece speaker is, going the entire way across. I reckon I’ve put in the earpiece speaker correctly, but the bit in step 17 is nearly the same in my phone; sticking up a little bit.

Could it be that I over-tightened the screws? Did I not place the earpiece speaker in correctly? I’ve checked locations of the screws and nothing is wrong with those, and it looks straight-up fine.

I know this is more of something to put on a normal post or question, but I put it here to reference step 17. I need help on this before I replace the screen again. (Using legitimate apple screen, just refurb glass)

can i get a confirmation that this part is compatible with the 2020 SE?

This part is not compatible with the new SE. You would need the iphone 8/SE part.