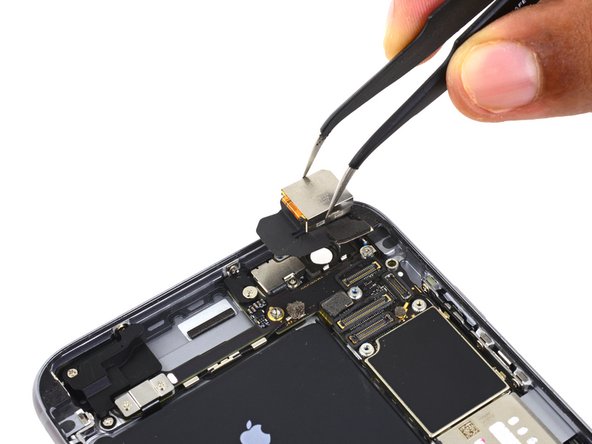 Follow the steps in this guide to replace the rear-facing iSight camera in your iPhone 6s Plus.

Great instructional video which saw me through the entire disassembly of my phone, and then clear and concise enough steps on the page to help me put it back together after installing the new camera. Thank you!!!!

I completed this repair at the same time as replacing my battery and headphone/lightening jack assembly. The problem I was experiencing with my camera was jittery video and unusable photos. The stabilization gimbal had died, though I am not sure that is the right word for it. It's more like it had an overdose. Anytime I would come to use the camera you could hear a tiny clicking noise as the lens armature shot itself about within its tolerances. Photos were out of focus and jittery, even when taken with the phone completely stable and untouched. I could most of the time just manage to make it take photos to deposit checks by holding the phone horizontally and in very bright sunlight, sometimes tapping the phone until the clicking noise stopped. Videos would hunt for focus and look as though I was actively shaking the camera, no matter what. Sometimes it was worse than others. Replacing this assembly completely fixed all issues.

Michael, you might have been interested to know that the focusing problems you experienced are chronic in the iPhone 6 Plus and Apple has created a repair program. You might have found this page useful if your serial number was eligible. https://www.apple.com/support/iphone6plu...

Micheal, I am having that same problem as well! Good to know that replacing it fixes it!

Talon, the repair program Apple has is only for the 6 plus not the 6s plus.

By the camera lens is a tiny strap piece that I bumped off and now I am not sure how to put it back on?? Do you have any pictures or advice that would show me how it goes back in the phone?

Note that your question prompted me to go back and change how I did it to only realise I had it correct all-along ;)

Hi, I was wondering if it was possible since my camera on iphone 6 plus is damaged, if I can replace it with a 6s since it's 12 megapixels. Let me know your though.

i got this and accidentally got a regular 6 plus not the 6s plus camera . apparently there is a difference because it wouldn't work. Replaced it and works great. anyone with a brain and a steady hand can do this.

so I installed a new camera and after re-installing the front of the phone…the screen is unresponsive to typing in the passcode or accepting a fingerprint to open the phone back up.  everything works fine..i’m even seeing txt messages come in…just cant seem to unlock the phone because the  keypad isn't responsive.  any advice?

I replaced my rear camera and now neither camera has an image! What did I do wrong?

I have the same problem :( did you get any answers? thanks

I had very bad issues with the i-Sight cam! it was shaking so wild, you couldnt see anything on the pictures. Apple said, my 6S+ is not under this special i-Sight change programm which was describing precisely the same issues!

But the new cam fixed it all! And put a new battery as well ;-)

I just discovered that the iSight camera does not include the camera cover. I also cannot find the camera cover for sale on this site. This is very frustrating. I didn’t know the camera and cover were separate pieces. I think I just bought the camera when I didn’t need it and didn’t buy the cover that I do need.

This is not good. Please help!

Couldn’t have done it without the step by step guidance and video. Thanks for the help. New camera works great!!!

Dropped my iPhone and the camera succumbed to the “Black Death”. No software fix for this one. Bought a great toolkit from iFixit along with a new iSight camera. Following these well documented instructions had the phone fixed in short order. What a great website!

Really fun to do and the breakdown was helpful and easy to follow, thank you

No, they are different and non-compatible.

Newbie question. If I replace camera as in the instructions, will I need to reloadd all apps and data ?

I even took apart again to double check my connections.

Hello, did you ever find a resolution to this? I have the same problem :( thanks

did you solve this? I have the same issue :( thanks

How can I replace the Rear Lens of the Camera ? It’s only holding with Glue ???

Right … I followed this link from the YouTube video for the camera lens replacement.

this is awesome. thank you so much!!

Hi, I need to know if I need to order a new lens with my replacement back camera. When you remove the back camera- does the lens (outer piece that is exposed to the outside of the phone, the piece that could be scratched) come with it and do replacement pieces usually include this lens piece too? Thanks

very easy to follow. Was able to replace my camera and now my 6s Plus is back in business.

I successfully repaired my 6s Plus by transplanting the rear camera and lightning/headphone jack assembly from a badly damaged donor phone. I was worried about all of the adhesives, but the whole process was pretty straightforward with this guide. Looking forward to getting another couple of years out of this phone!