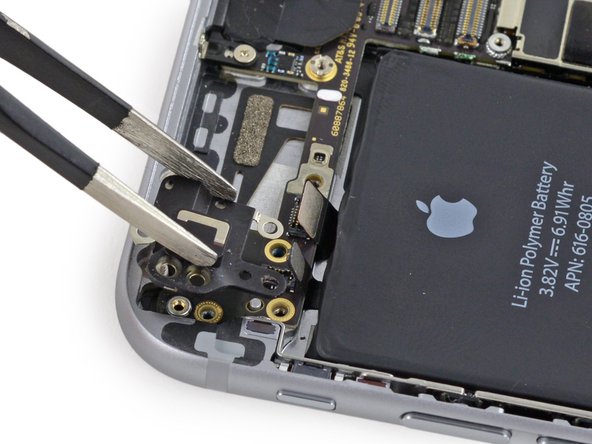 Spotty signal on wi-fi? You may need to replace the upper wi-fi antenna in your iPhone 6.

If your iphone 6 has bad wifi signal, replacing this unit alone won't fix the problem. I had to replace the cable (PN: T308S) connecting this unit to the logic board. I bought it on eBay. It came with completely differnt part number, but worked perfectly

Yeah khanhag005 is right, replacing this piece alone most likely won't do anything to help your WiFi / Bluetooth.

Replace the WiFi / Bluetooth cable if your WiFi or Bluetooth isn't working or if your WiFi button in greyed out. I bought mine on eBay for less than $3 and it took me less than an hour to do using the guide iPhone 6 Antenna Flex Cable Replacement

Referring to the Antenna Flex Cable Replacement post comment on Aug30/31 post by Andy, 85 was referencing the grey out probably can't be fixed by replacing the cable neither

wonder if anyone has the actually grey out wifi issue and know which part to order?

I had an issue with my iPhone with poor WiFi reception and most of the time couldn't connect to WiFi at all. If the WiFi signal from a router was strong, that was the only time I could connect. The Apple store ran their diagnostics and told me there was no fault detected and the option was to pay $429 AUD for a replacement phone so I did some fault finding myself. After reinstalling the firmware through a DFU restore and reinstalling the software to rule out both those contenders it was pretty certain it was a hardware issue.

I replaced the WiFi antenna and also the antenna flex cable while I was in there. The issue is resolved and phone is functioning perfectly. I cannot say which part solved the issue but figured it was worth changing both out at the same time. The repair guide was spot on and super easy to follow, parts supplied from iFIXIT were good quality and did the job. Overall coast was just over $50 AUD including tools and shipping. Thank you!

Bought the new antenna and the required tools from amazing and followed this guide to the last detail. I was successfully able to replace my antenna and solve my wifi and gps issues. Thanks a lot.