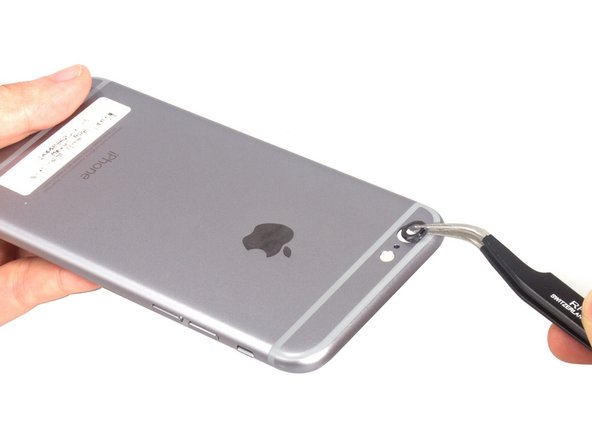 Step 5 - Disconnect the rear camera from motherboard, gently lift ribbon towards the top. This will help release the thin black tape covering the top left screw holding the bracket. I peel it back just enough to access the screw.

Step 7 - You will destroy the bracket. The bracket and lens are crimped or pressed together somehow, as stated in the guide. The next step I modified; press out the rest of the broken glass in the lens. Then as in step 8 press the lens from the inside, outward to break the crimp.

Step 8 - Lift out the bracket, it may still be attached.Use heated air to remove the black foam square from the old bracket and reuse for the new bracket.

To repair, I'm still looking for the best way. I carefully used super glue to place the lens and bracket in place.

Does anyone know if the iPhone 6 plus Lens replacement is about the same?

Anyone knows where can I purchase the camera bracket? I don't seem to find it.

Hi u can buy it here at the top of the guide :-) under relevant parts.

I'm with u Greg , I tried the hard way it's like pulling a good tooth ! Something gonna break and possible bend . Great video though exposing the hidden screw.