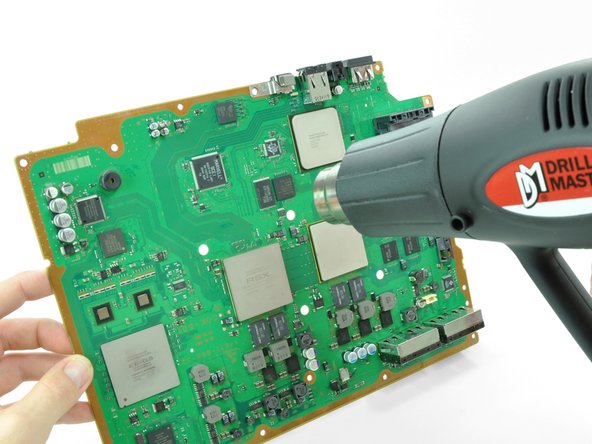 Use this guide to potentially repair PlayStation 3s with the "Yellow Light of Death" error.

This procedure may not completely revive your console. Since the “Yellow Light of Death” is a generic hardware error, the issue can range from an overheating CELL/RSX from dried thermal paste underneath the IHS, bad NEC/TOKIN capacitors, a short on the board, faulty RSX, etc. This guide may only temporarily fix consoles with a faulty flip chip (most likely RSX but CELL could also be at fault). An RSX/CELL replacement (requiring a BGA rework station) would be required to permanently repair a console with a faulty flip chip.

Note: Your PlayStation may look slightly different inside. Be cautious when performing this process on your machine.

To reassemble your device, follow these instructions in reverse order starting at step 41.

To reassemble your device, follow these instructions in reverse order starting at step 41.

Done this twice, first time it lasted 2 weeks and the second time 10 days. I'll do it one more time and if it goes again, I think I'll be buying a new console.

Great repair guide, clear and simple -I don't know why it's rated as difficult -there's no soldering or wiring to do.

Great kit! And it worked! We have brought the PS3 back to life! Hoping it stays this way! But for the price of the kit it is worth the try!

I completed this repair last night. It wasn't as hard as I thought, though it did take me almost 3 hours to accomplish. My PS3 is back up and running, and the fan is so guiet not I can hardly hear it.

I will add that these pictures provided are from a 60GB launch PS3. I have an 80GB (MGS4 Bundle), and some of the inner workings are a little different. The card reader remains attached to the upper casing, and the ground wire for the A/C switch is run under the power supply... as opposed to over it as it is in this guide.

Overall, this is a great guide and the kit was a great price. I hope my PS3 will remain operational at least through Christmas... I've got my eye on the UC3 Bundle; )

This is an excellent guide! I've had the YLOD before about a year ago, and my brother shipped it off to get it fixed for me (his COD:MW2 was stuck inside). It cost him $150 to get it repaired because the warranty had run out. While it did work for an entire year after the repair (which is very surprising with most people saying theirs only worked for about a month after getting it fixed), I definitely don't think all that money was worth it. I am extremely pleased that I was able to fix it myself with absolutely no cost to me (I borrowed a heat gun and thermal paste from a friend). No cost is way better than $150 obviously. I do intend to sell my PS3 to Gamestop though and buy a new slim, which I hear is less likely to get the YLOD due to better cooling. I will most likely open it up at replace the thermal paste though, as I've heard the paste Sony uses is very cheap, along with a few modifications for better cooling.

Long story short, this guide just saved me $150 dollars. Also, my PS3 is the 60GB backwards compatible if that is of interest to anyone.