Mac never wakes from safe sleep when battery is drained

This might be a strange question but here goes. When I use my Mac, it sometimes just cuts power when the battery is at high percentages like 90 percent. I've been able to solve this by calibrating the battery but now I have a new issue. When I get the battery to zero and plug in the charger, my Mac doesn't wake up like my other Macs where the moment I plug in the charger and log in, all my apps are still open and I can pick up right where I left off. However, this is no longer the case as when I plug in the charger, I am brought to an apple logo screen with a progress bar, indicating that it has restarted instead of resuming like it is supposed to. And all my apps have to reopen themselves compared to other Macs where I am able to resume where I left off. Does anybody know how to fix this. I have a suspicion that it is the battery as dismantling it shows that it is aftermarket and coconut battery reports no serial number. This is a Mac that I have had serviced recently. 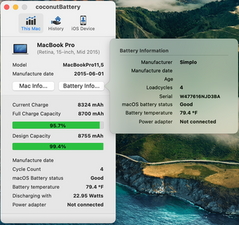 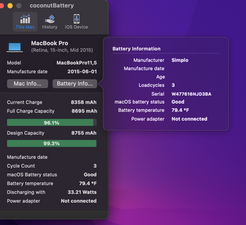 Ouch! This is a bad battery! Basically, the micro controller within the batteries firmware is messed up.

This is likely a rebuilt battery taking good cells from one battery and adding in the others from a different battery. Then going into the firmware deleting the information it had which was the S/N, date of manufacture and cycle number (which just restarts counting on its own, now at 4)

This is a very cheap battery and won't work reliably as the cells are already used so its a lifespan will be quite short.

I'm not entirely sure if the cells are completely used up as the battery reports 8700mAh and seems to last a decently long time when calibrated but I will consider getting a new battery at some point.

@jimmysofat6864 - Think of it this way you have a flashlight which has four cells two still have some life in them, you take your kids racer which has two cells and slap them in replacing the two bad cells. Would you call this set 'new' No! Its a Reconstituted set! Thats what we have here someone grabbed a cell here and anther cell from there... Pulling them all together to make this battery set. But the micro-controller needs to be wiped! Which is what this person did and sold you a messed up battery.

@danj I got a new battery from NinjaBatt, a reputable battery brand and the exact same thing is happening.

@danj I added the photo it is also missing serial info as well.