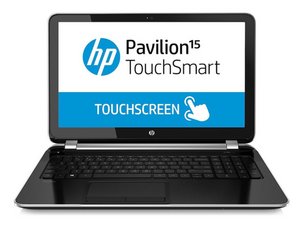 Working PSU and battery. Why does my pc not show any signs of life?

I have an Hp pavilion x350 15-cr0087cl. The laptop worked great but had a crack on the back cover. When removing the back cover I cracked the screen. Bought both new screen and cover on Amazon, but upon testing the new screen the laptop made a strange noise and did not boot. I figured it was the wrong screen so I removed it and tested on hdmi monitor and now it is lifeless. I ended up removing all components including motherboard and tested them one by one. Still unclear what is wrong with it. The led indicator only comes on when removing the battery and plugging into the wall; however, the on button doesn’t cause the laptop to boot. I know that the issue has something to do with the new screen I was attempting to install, because I was playing valorant on the laptop only a few hours earlier. Wondering if anyone else has any insight to my issue. Mainly wondering if it is fixable or if it is a lost cause.

Update on the hp pavilion:

In an attempt to get something out of the laptop I removed all accessories, including speakers, screen, hard drive, ssd m.2 drive, keyboard, touch pad, and fan. After plugging it in only after a few seconds there was a loud pop that came from what I think is the GPU, and had thermal paste debris land on my face which was quite hot. Upon inspection, I noticed the thermal paste is completely removed from what I called the GPU. Also looks like there is a tiny dot on the “GPU”. Not sure if this is some kind of damage or if it’s just burnt thermal paste. I would still appreciate some insight to my previous questions. Mainly if I should just scrap the laptop or if it’s fixable. I checked online and found some motherboards for sale however it doesn’t seem worth is to buy $180 motherboard and $150 screen, when I could buy a new or used laptop for the same price and with better specs.

Image of it plugged in. Only response is from led indicator. 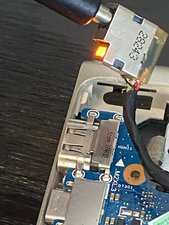 Motherboard and close up of what I think is the GPU. 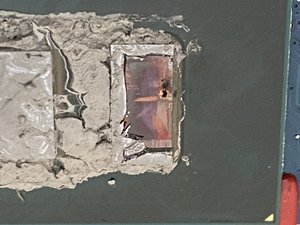 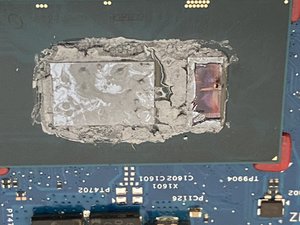 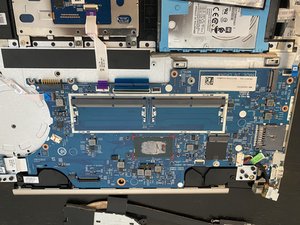 Cleaned up the paste to get a better look and it looks awful. That pop and debris must have been more than just thermal paste. 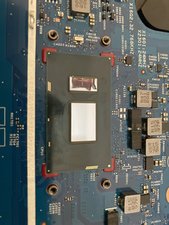 Ooof. Looks like what is probably the PCH has seen better days. Definitely seems like there was some sort of damage that occurred here. I would try and clean up the thermal paste here with some isopropyl alcohol so you'll have a better look at things. But it very much looks to me like a burn hole in that chip. Typically the top of those is very silver and shiny, and it looks off color here, like it was subject to a lot of heat.

I can't say exactly what happened. But if that is damage (and I think it is), you're going to need at the minimum a new system board to fix this. Screen may be fine. Or maybe not, depends on what happened.

Were you sure to unplug the battery while you were replacing the screen?

I did remove the battery when installing the new screen. Since I assumed that the screen was at fault I already returned it through amazons service and got a refund since I assumed the screen was fine. I still have the old screen with the crack. So that chip is called PCH. I am very new to laptop and computer stuff so I just assumed it was some kind of GPU as it conducted tons of heat.

Do you think it is possible to replace just the PCH or is the overheating issue because of damage to the motherboard? Also, if I can't manage to repair it what should and can I salvage? I was planning on building a pc and have most of the parts except the OS installer. Could I possibly use the OS installed on the laptop hard drive, at least till I can afford the OS installer?

Or maybe even salvage the CPU?

Thank you for your help and patience!

@gabagabado Yes, laptop CPUs are a little different. And not even all laptop CPUs show up like this. I totally understand thinking it's the GPU, I thought the same thing for a time. But I believe many of these mobile Intel CPUs are produced like this. The PCH is essentially like the "chipset" on a motherboard for a desktop computer.

It is certainly possible to replace the CPU (I don't know that just the PCH could be replaced). However. It is generally not cost effective to do so since these mobile CPUs are soldered to the motherboard rather than socketed, like in a desktop. So you would need someone who has the skills and tools to remove the old CPU and solder in a new one. Plus finding a compatible CPU. Between parts and labor that is likely more costly than just replacing the whole board. Or the whole machine.

@flannelist It's soldered, so without the right equipment this is a system board at the bare minimum. The laptop is almost certainty a total loss.

I've never seen a motherboard swap work economically UNLESS you get a junk laptop with something like a bad screen... and then you end up finding the donor is the better overall unit so you might as well move the screen and scrap the motherboard from the old one.

This could be due to multiple things,:

To help I'll answer your questions one by one:

Before i go any further I am not a professional repair technician however these are some good pieces of advice in my opinion. Hopefully someone else more experienced will be able to take this further:

Wish you best of luck :)

I did in fact forget to ground myself so I might have shorted something. The motherboard looks fine and there isn’t any immediately visible damage, so that is why I hope it’s still salvageable. I would attach an image for f the GPU area for inspection but I do not se that as an option on this site. After the last pop I am almost to scared to work on it again. What if it just burst into flame. You mentioned that some thing is possibly consuming too much voltage. I believe this to be true. When I still had a heat-sink/fan the fan wouldn’t turn on when it got plugged in and there was no indication that it was turned on, but the heat sink was getting extremely hot. I assume that the reason for the pop and splash of thermal paste is because I removed the heat-sink, and when I plugged it in the paste got cooked.

THANKS FOR THE HELP!

@gabagabado Attaching pictures need to be done by editing the original post, you cannot put pictures in comments. Only Questions and answers. There should be an option to upload media if you go back and edit. It would certainly help in diagnosing the possible damage to the chip (GPU?) if we could see what it looked like.

@flannelist Ok I will try. Thanks!

Morning @gabagabado. That iGPU is gone. It has been completely destroyed and likely is now unusable. As a result of this you are now required to hook up a gpu to the thing to even get a display out (If that even works I am not sure). After seeing that I'd say that unfortunately if you are not advanced at soldering and don't have an extra intel mobile chip around a new mobo is required as the other people have said.

With regards to your voltage concern, what was the psu you used rated at (Voltage and Amps). I am not a professional technician nor do i daily one of these but on my 10th gen intel laptop my brick is at 65w over type C so I'd expect it to be somewhere around there.

@np_f1_2021 It will never turn on again. The chip that blew is required to function, even if you hooked up a eGPU. It integrates the northbridge and southbridge as well; PCH is on the motherboard.