MacBookPro overheating and shuts down.

Ok, so I’ve recently developed an overheating issue and I’m having trouble with diagnostics as well.

The upper left quarter (behind F1-F4 keys) of the lower case is crazy hot. Hotter on the bottom face. If I play video plus other heavy tasks, or videoconference alone, it shuts down entirely.

I’ve had this before, but last time it was a dead fan. Fan is okay this time but I replaced it anyway.

I no longer have an optical drive, so can’t boot off original disc.

My only suspect is a Crucial MX 500 SSD (1TB) installed a few months earlier. Previously I was running a MX 300 SSD (500M) alongside a 500M HDD (in place of optical) without issues. When I got the 1TB SSD, I made it primary, scooted the 500M SSD over to optical bay, and totally removed the HDD. The 2nd drive is a clone of the primary drive, and only backs up once a day. I was under the impression that 2 SSDs generated LESS heat than 1 SSD + 1 HDD.

Not sure what else is potentially relevant. 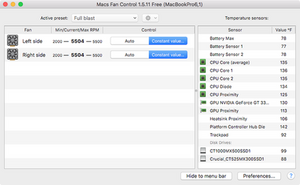 Sadly you likely did your self in here with the SSD as your boot drive!

So depending on which model you have you could have a SATA II model Early/Mid 2009 & Mid 2010. The Early 2011 which is the first to offer SATA III in the HD port but only SATA II in the optical drive! Then in the Late 2011 we finally got both ports SATA III.

So one needs to be careful on what drive you use and which port can also have a big bearing here as well!

Lets add the last piece of the puzzle as the hardware alone is just part of it! We now could selected the wrong drive as the boot volume! So lets say you put the MX 500 SSD into the optical drive bay and put the MX 300 SSD in the HD bay and you have an early 2011 system we are still using the wrong drive in the given bay but it appears to work! Well that would be correct a SATA II drive will play in a SATA III bay! Now lets look at the optical bay which is SATA II will the SATA III drive play within it as the boot drive - Nope! The system is expecting a slower drive so it struggles as its getting a fire hose of data at boot up but it may appear to work as a data drive as the data flow is not heavy enough to over run the systems buffers. Just like your cheeks can expand if you are getting too much in your mouth at once. But if you go too far stuff starts exiting your mouth! Think of a can of whipped cream here when you where a kid.

So we need to use the correct SATA I/O drive in the given port!

Now I keep talking about fixed SATA drives here as that is what Crucial sells. There is a few drive makers who did make drives which auto sense the systems I/O port and match its I/O speed!

Think on how when we first went from 10GB Ethernet to 100GB and then to 1000GB we had a mess! As people would mixup the device pairing expecting an old 10 system to talk with a 100 system via an Ethernet switch which didn’t have the smarts to bridge the data over between the different data rated ports. It was such a mess the IEEE standard group created an updated standard to address this by forcing a preamble in the data transfer so the switch port would know what the device was able to support and connected it to the correct net within the switch and if needed if the switch could offer it bridge the data across to the other net within the switch. WOW! talk about confusion and complication!

We have the exact same story here! Some drive makers made auto sense drives like Samsung! As an example here’s the Samsung 870 EVO spec sheet If we look at the sheet we can see the Interface line clearly calls out:

So we know it will play nice in any SATA system from the slower 1.5 Gb/s (SATA I) to the highest 6 Gb/s (SATA III) It will sense the ports speed and match it in the HD bay. Apple did mess up on the Optical bay so it won’t work correctly on some MacBook Pro’s as that preamble handshake is messed up on some models. So we still need to be careful in the optical drive bay!

OK what about that heat issue?? Ever try running on a treadmill? The harder you run you get hot but you aren’t moving! Sadly, that is also happening here.

The system is working overly hard to deal with the data volume but the buffers it has just can’t keep up so it chokes up and then has to ask for the data over and over again, over time the pieces do make it in or out, but at a snail pace from what it could offer.

So once you get your drives setup correctly you should see a sizable difference!

Here’s a image of the SATA I/O speed 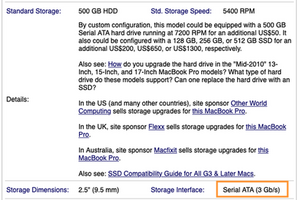 I added exact specs above and I understand most of what you are getting at. Looking at my model would there be any benefit to switching drive locations in my case?

Also, it looks like my fans aren't being triggered to speed up anymore. I installed Macs Fan Control and it looks like I can get a nice sensor-based speedup preset if I purchase the pro version.

@scottbernardis - You'll need to take out your Crucial MX 500 SSD as its too fast for your systems SATA II I/O which in turn causes the system to over heat!

You'll need to get either a fixed speed SATA II drive (3.0 Gb/s) or go with an auto sense drive like the Samsung drives even the newest 2.5" drives are still auto sense.

To know if the drive will work the spec sheet MUST clearly state either 3.0Gb/s or SATA II. That will fix your problem!

I initially went with the MX500 because that's THE referred drive on iFixit for my exact model for dual drives.

Is there a model line I should be looking at for Samsung (EVO vs QVO?)? Am I understanding correctly that any Samsung sata iii is okay as long as it shows 3.0g/s?

Back to my system, so to confirm, both my primary and optical i/o are sata ii? And same question, any benefit to switching drive locations until I get new drives? Switch MX 300 back to primary, and make it boot, and move MX 500 to optical as data only?

@scottbernardis - Sorry you got messed up. Someone only looked at the 2011 models and forgot about the older ones.

Either one will work, the QVO series is a bit cheaper, but you give up some performance. Here I think you won't see any difference. Yo could look for other drives tan Samsung as long as the spec sheet clearly shows 3.0Gb/s or the term SATA II.

Correct! Your system is strictly 3.0 Gb/s (SATA II) Moving the drives around won't really change things as the blessed drive (booting drive) is the key If the MX 300 has the OS still installed all you need to do is go into Startup Disk preference setting. Making sure th MX 300 is the boot up drive.

As far as using the MX 500 for a data drive I wouldn't do that. While the amount of data I/O is a lot less you run the risk of file corruption if you shut your system down while its still fighting through a data move.

Think of it this way... Playing Russian Roulette with a gun with four chambers with one bullet has a higher chance of shooting than a gun with twenty chambers. But in the end someone still gets the bullet.

I'm really starting from scratch looking at SATA II drives. Any recommended brands in addition to Samsung? How do I compare performance between SATA II's?

Sorry to hear about this and hope this isn’t your main computer.

Then, maybe try something like TGpro and see if it you can crank the fans.

Final hope for this is to put everything back to stock and try again.

What version of macos is the computer running.

My friends’ macbook air 2019 has gone into a thermal runaway and has been sent away for a full logic board replacement. Maybe a fuse or something blew and that caused ur thermals to completely spike. It could also be a hard drive sensor if it originally came with a hard drive (But i doubt that).

I updated post with some specs to answer questions.

I can still boot off the MX300 but it still overheats. I haven't tried to force a shutdown here though.

I installed Macs Fan Control and can now manually get the fans up to "full blast". I had no idea they weren't already full blast. So I guess whatever triggers them, isn't triggering, and that's part of the issue. Screenshot included above as well.

Going off of the fact your having overheating issues maybe that thermal paste is cooked. Again try what @danj said as that will help with future issues (And maybe even this one)

What gets people into trouble is trying to upgrade older systems which have the slower SATA I (1.5 Gb/s) or SATA II (3.0 Gb/s) ports. For a long while availability of the slower fixed I/O drives was not a big an issue, like everything the old stocks dried up!

Luckily, some drive makers realized the need to offer bot settable and Auto Sense drives which also helped them as one SKU served two markets! Sadly, people assumed these drives are the norm! So we often found people getting a settable drive and forgetting to alter the jumper. Auto Sense fixed that but people often forgot there was also Fixed Speed SATA III drives too!

As the market for older SATA I/O drives was waning and the extra costs of offering Auto Sense didn't make sense they went back to fixed speed SATA III (6.0 Gb/s) logic.

So today we still need to be careful when upgrading the older SATA I & II systems as these fixed speed SATA III won't run correctly!