Does my iMac 2011 have dead GPU? Unusual symptoms

I know about iMacs 2011 tend to have dead GPU but I wish to know 100% before I start deep messing around in it.

So when power on - it has “chime” and black screen - I hear HDD is loading something - and nothing else happening.

When I insert my old MacOS Panther DVD to boot from it while connected to TV via minidiplay to HDMI cable (which 10000% works) then……….. it beeps 3 times - 2 seconds and then 3 beeps and so on (I know 3 beeps and………. 5 seconds is RAM problem) and I swapped with good know RAM and same thing.

I know to see video from MiniDisplay “drivers” must load up (so fully loaded Recovery or Login Screen) but what if HDD + LCD is dead?

I would do HighSierra USB install disk - but I have Windows 10 only and it is too messy to make install disk.

Those 3 beeps while macOS from DVD install is confusing me.

Thank You for help

Lets give this a try, restart your system and press the T key to enter into Target Disk Mode. Do you see the FireWire and ThunderBolt icons on your screen?

You'll want to use a USB keyboard.

OK, very strange! Sounds like the system was very rarely used if at all..

In some ways that helps narrows down is issues.

Let’s check the onboard diagnostic LED’s what are they telling you? 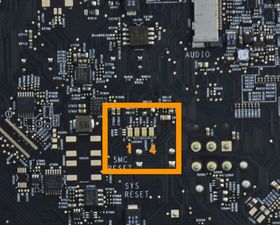 Beyond checking the diagnostics!

First thing I would do is to replace the PRAM battery as it’s likely dead being unplugged from AC for more than six months would have drained it.

Then the question is what needs replacing beyond the PRAM battery is dependent on what the diagnostics tells us after we replace it.