A while back, my computer overheated and fried my keyboard so that only a few keys would work and, when typing, often a bunch of random characters would input.

Recently I’ve cleaned out the whole computer, put new thermal paste in and have been trying to replace keyboards. The computer runs a good 15C cooler, but the keyboard just won’t work and I’m 90% sure it’s the connector ribbon. The thing that I don’t get is that the backlight connector works without any problem and without the clamp as well.

On my first keyboard replacement (keyboard from China via Amazon)…the keyboard mostly worked, but then stopped (I think I scratched part of the connector ribbon when trying to install it.

On the second keyboard (from iFixit) it started working great for letter-only keys…all keys around the periphery (enter, spacebar, tab, etc) all didn’t work. After trying to re-insert the ribbon, it just plain doesn’t work at all now. (Note, I’m not using the ribbon clamp because it detached and it’s so small that I need to figure out a good way to get it back on). I’ve tried to use electrical tape as a shim, but it doesn’t seem to do anything

All that said, I do have some more specific questions: 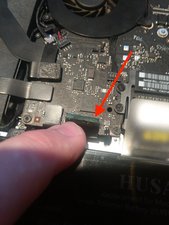 The blue tape is to protect the contacts carefully lift the tape off.

You'll need to carefully remount the clip. Clip one side in and bend it slightly to fit the other. Don't over do it as it will snap in half!

Next, place a piece electricians tape folded over to create a pull tab at one end. With the tab end placed just below the contacts on the ribbon cable you'll have an easier time inserting the ribbon into the connector and holding it in place as you press the clip down. There is no force required here! It's the stiffness of the ribbon cable you need to fight as it wants to straighten out.

The keyboard flex only goes in the connector until it stops - that is a zero insertion force connector - so no pushing or forcing.

If you managed to scratch the carbon traces on the plastic flex it may not work properly - plastic tweezers can be a good thing if you are worried about damaging it. If you remove the blue plastic from the tip of the flex cable it will not be rigid, or as thick, and will not get a good connection / or work at all.

The plastic clip / clamp on the socket is mandatory - you will not get a good connection or at all without it. if it has slid off the back of the connector it is possible to put it back on with a magnifier and some tweezers - but be careful, it is easy to damage the connector.

If you aren’t comfortable doing that I would take it to a local shop - once the connector is damaged it can be replaced, but you would be charged for logic board repair at a shop that knows what they are doing, and a less knowledgeable shop would want to replace the whole logic board.

I need this flex cable where can I find one or anyone know the model number ?

There is no separate cable, you'll need to replace the entire keyboard assembly MacBook Pro Unibody (A1278) Keyboard