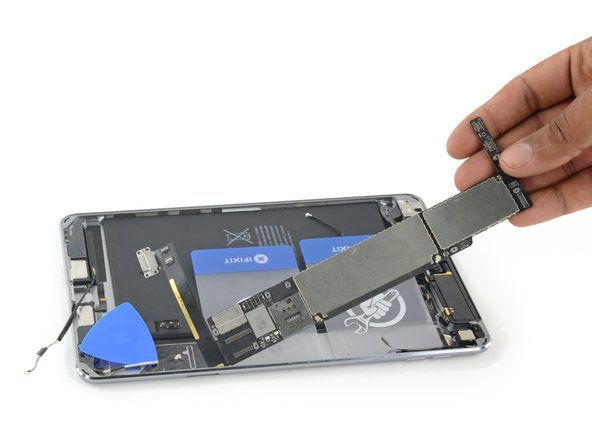 Follow the steps in this guide to remove or replace a faulty or water-damaged logic board in an iPad mini 4 LTE.

Note that if you replace your logic board without a paired home button, you will lose Touch ID functionality.

This guide needs amending urgently before more people destroy their LCD displays by cutting through the tape holding the backlight to the LCD glass, or pushing a pick or other tool between the LCD glass and touchscreen glass.

Don't insert the opening pick any deeper than the black bezel on the side of the display.

This is WRONG and will destroy your display. The black bezel is 5mm wide, this is beyond the 1mm wide adhesive and into the LCD display and backlight assembly. Do not insert anything more than 2mm down the sides of the display.

Any further than 2mm and, like me, you will be looking at a very expensive LCD display replacement.

Thanks IFIXIT.COM for publishing an incorrect guide that has destroyed my display.