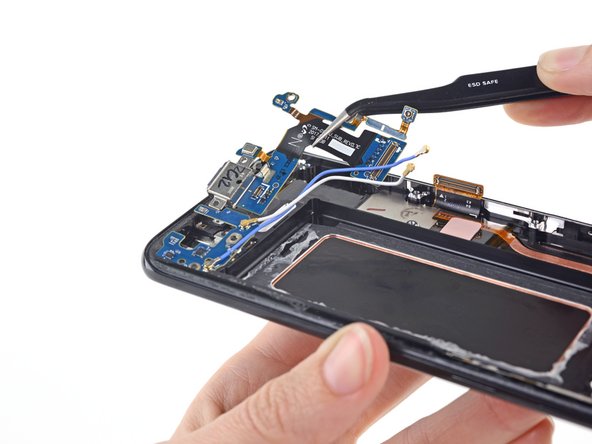 Use this guide to replace the I/O daughterboard in your Samsung Galaxy S8. Components that would warrant replacement of the daughterboard include a damaged USB-C connector or microphone.

This guide involves removing the rear glass cover, you will need replacement adhesive to reattach the back cover to the phone.

After reapplying adhesive, follow these instructions in reverse order to reassemble your device.

After reapplying adhesive, follow these instructions in reverse order to reassemble your device.

Hi i just change the motherboard and the battery is new the display show ( ! ) is not working. Can you help me to solve the problem. Thank you

Step 22 does not apply to the Samsung galaxy s8 SM-G950F, the daughterboard is different and does not have that connector for anyone trying to source one !

sm-g930F, daughter board does not have the 3mm screws .it seems to use an elastic at each en to hold in place. has anyone successfully replaced this daughterboard?

That battery temperature thing really confused me while testing as I put things back together. Makes sense it worked fine when I put back together after I'd had enough.

Those two wires/ arieals? They loop under the motherboard for when the speaker goes back on.

As you're testing as you put things back together, the volume buttons only work when everything is screwed back in. I've come across this before on other samsung phones, killed me the first time trying to figure it out!!