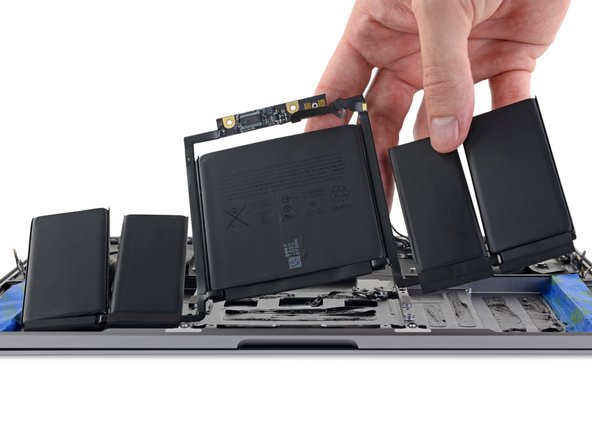 Follow this guide to replace the glued-in battery in your MacBook Pro using an iFixit kit with adhesive remover. The adhesive remover helps weaken the glue securing the old battery, making it easier to remove.

iFixit adhesive remover is flammable. Follow this procedure in a well-ventilated area. Do not smoke or work near an open flame.

To minimize risk of damage, turn on your MacBook and allow the battery to fully discharge before starting this procedure. If a charged lithium-ion battery is accidentally punctured, a dangerous and uncontrollable fire may result. If your battery looks puffy or swollen, take extra precautions.

Note: The solvent used to dissolve the battery adhesive can damage certain plastics. Follow all instructions and take care where you apply the adhesive remover.

You can remove the battery without removing the logic board, took me 45mins all in.

I did up to step 23 then jumped to 64, only a tiny bit of the battery cable is under the board and isnt glued down so can be removed/inserted easily.

i also didnt turn off autoboot as once the battery is disconnected it wont boot.

Darren - thanks for the hint! I was also wondering (and wouldn’t want to do) why to extract the whole logic board.

Overall took me an hour or so and I used the “thread” method to actually remove the batteries instead of the glue remover. Worked fine for me. The only issue was with getting the battery cable from und the board because of the tight fitting with the separator “wall” between the logic board and the main battery cell. I ended up breaking the glued little wall from the case, then you can easily slide the cable under the board and afterwards gluing it back into place.

I exactly what Kerry did. You can break that “wall” and then you can easily slide the cable in under the logic board. Not sure what that wall does other than provide a stop from the bottom case pushing on battery. I glued it back and didn’t seem to have any problems. I did not use the double side tape to secure the batteries so it would be easier to change the next time. Don’ t know why apple has to put so much glue. Scraping off the batteries is the hardest part!

Here is a link to a picture of the batter “wall” that you can break off and then glue back. This will save you from removing the logic board:

I replaced the battery and it started up at first but when I went to unplug the mac it shut off, the next time I started it up it said that the battery wasn’t charging and shut off when I unplugged it even though the battery had 73% of charge. I opened the mac and made sure I did all the steps and make sure the battery was plugged in correctly, but now it won’t even startup at all.