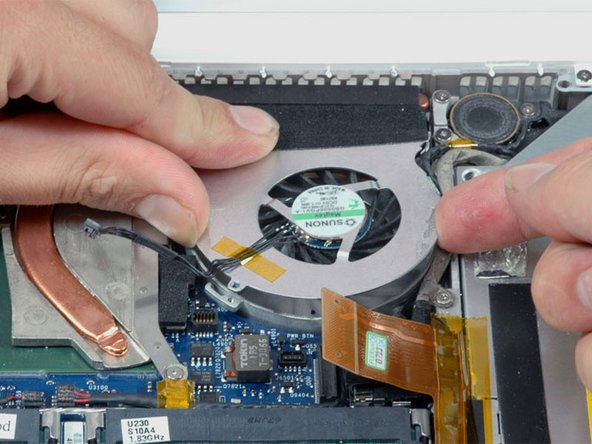 Replacing a defective fan is relatively easy and will keep your MacBook Core Duo running cool.

I am just extremely thankful for this great support guide material.

It was very clear to me. I shaped an empty cleenex tissue box, left only a little margin. I draw the bottom with a pen 24 squares numerating them from nr.1 to nr. 24, for the screw, one square for one set(or picture) of screw. I achieved to put the screw in exact order as I removed them, it went back, same screw into the same place. Not because I am that great, but because the guide is precise, and The Good Lord guided my hands to do this task with no errors.

But it was a useful experience, for future possible issues.

Having opened my MacBook several times before, fan replacement is one of the easier swaps to do. Tip: if your fan is running, but making upsetting noises, first check for a dust clog within the fan housing before you replace the fan. Lift the fan motor up without removing the felt tape seal, and inspect the heat sink grille for clogs (mine had a huge dust bunny on the left side, which was catching on the fan vanes). Carefully remove dust with spudger (or, ideally, a needle attachment on a 3M electronics vacuum). Good luck!

I just completed this on my white macbook which I purchased in 2007. First, while in steps 19 and 20 they tell you to remove all four fan screws (two that hold the fan to it's lower housing, and two that hold the housing to the computer), they then only remove the fan without the housing. The entire housing should be removed in order to clean the heat sink behind the top of the fan. My replacement fan came as one unit anyway, so I replace the entire thing. Second, after many heating and cooling cycles, the black felt tape described in Step 20 was degraded and not able to be removed from the fan without ripping it. I replaced it with a couple layers of electrical tape (hopefully it holds up), but I would recommend getting the correct replacement tape before replacing the fan. Otherwise, if you're used to working on electronics and are relatively patient, it's actually pretty easy to do.

Since this is a now 10 years old machine, don't get discouraged if you have some trouble with screws, specifically the longer screws in the upper case. I carried this machine with me everywhere for four years of college before retiring her, she's been twisted, dropped, sat on, etc. If your MacBook has been through what mine has you might run into the same issues. For me the top left screw sat below flush after being unscrewed and wouldn't pull up magnetically. I had to put light pressure on the case around the screw and use a pair of tweezers to grab the screw head and pull it out. Some gunk had built up at the bottom of the screw making it impossible to pull out magnetically. Be patient putting these upper case screws back in, over long periods slight deformations occur in the structure, so the screws won't line up quite as well as they used to. You shouldn't have to twist hard for the screws to go back in, try slightly pushing the bottom case up/down/left/right if you're having trouble. Great guide!

OMG I tore the fan connector out of the MB... The pads are all stuck to the connector... I barely used any force at all... Going to scrape the leads and attach wires now... :(