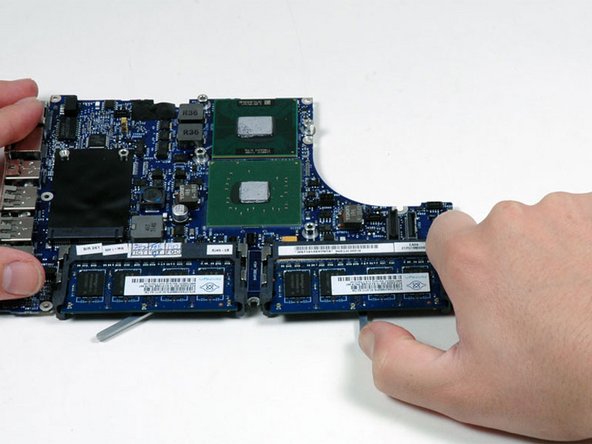 This motherboard includes all ports on the left side.

Thanks so much for this guide! My mac wouldn't turn on after spilling some wine on it a few days before. After I followed these steps and let the parts lay out to dry overnight (after cleaning everything with rubbing alcohol), I put it back together and it turned on!! Thank you a million times!

Double-sides sticky tape is very useful (to keep the screws together) on top of numbered post-it notes for the steps.

The shop wanted over $700 ($600 for parts, $90+ for labor) to fix it, which I definitely wasn't going to pay, so I decided to fix it myself. I spent right at $150 for a new logic board, magsafe board, and RAM upgrades and delved into the depths of the Macbook. I followed every step of the guide closely and she started right up after reassembly. Great guide, thanks!

Great Guide - i used zip-lock bags for screws and wrote the step numbers on each.

I've managed to replace a macbook 1,1 logic board with a macbook 2,1 (2GHz) one, and replaced a 4,1 on another machine (which looks interchangeable with older ones)

It is NOT possible to replace these older boards with a newer macbook 5.2 board because ALL the connectors are different, and the screw-holes are in different places.

Managed to revive my years old dead Macbook! Glad I found this guide and helped me diagnose and fix the problem. (Only wish I would have found this BEFORE I started disassembling my Macbook. Half the beginning screws don't have a home now. Whoops) Overall great guide. The alternate pictures were great since they were more in-line with mine. Easy to follow, and everything turned out great. Thanks!