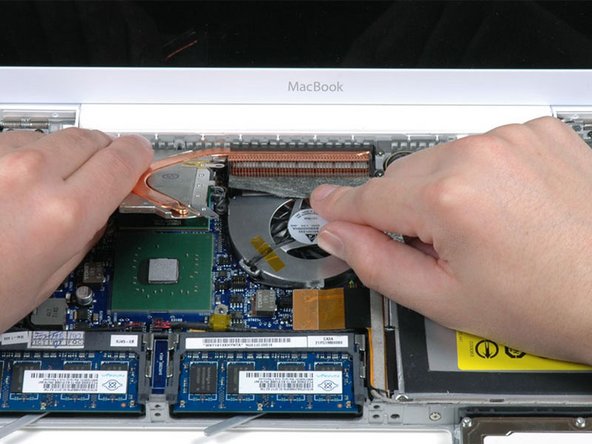 The heat sink helps keep the processor cool and happy.

what if the black felt tape is dissolve itself in step 13? do i have to renew it or doesnt metter? it just crumbled.

I love these guides, they have helped me to replace the airport card, replace the keyboard cable and modify the optibay to install a 2nd drive.

My suggestions would be if you are going to remove the heat sink take out the cooling fan first. This is just because the removal of the heat sink is much easier if the fan is out and it's really not too much more work and when you re-assemble make sure the black tape is really sticking down, if it's not the full cooling will be lost and funnily enough the noise of the fan increases.

Thanks ifixit team, you have been life savers.

I used the guide and had no problems getting to the point of replacing the heatsink. I see how the rear heat sensor (250) clips onto the logic board but for the life of me, I cannot see how the longer sensor attaches. I see two contacts but other than the felt thing, there is no way to attach. . . What did I do wrong. . . HELP. Milt King

To refit the temperature sensors, ensure the cables are rooted under the clips of the heatsink. The connectors then just push down on to the motherboard pins.

Does this heatsink have sensors that need to be plugged in on the motherboard?