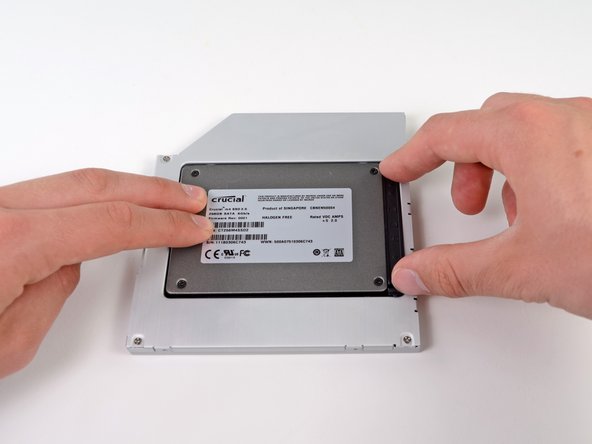 There are many benefits to adding a second drive to your iMac such as improved speeds, greater storage space, and less heartache when installing new software. Use this guide to install one using our optical bay drive enclosure.

I followed this guide to place a samsung 840 EVO 750 GB ssd in the optical drive bay. The instructions worked near perfectly. However, I got many SATA CRC errrors. Not a connector seating problem. After placing the SSD in the hard drive bay (following the hard drive replacement guide) no more CRC errors.

I tested with an older laptop hdd: This works fine in the optical bay.

I reassembled my superdrive and placed the SSD in place of my built-in HDD for a nice speed increase.

Is there any listing of ssds that work well in the OD bay?

I recently replaced my HD with an SSD drive. Watching this guide actually helped too!

I would also like to replace the optical drive with a Hard Drive. Would it make much of a difference wether I use a SSD or a 7200rpm HD? I would be using it for video and audio files for Protools and Final Cut Pro that are running on the SSD..

It seems like the negotiated speed on the optical SATA is only 1.5 Gigabit..

Do you attach the thermal sensor to the equivalent place on drive enclosure as it was on the optical drive?

Would love to know how to re-use the optical drive externally, with an inexpensive enclosure.

There is the OWC SuperSlim (https://eshop.macsales.com/item/Other%20...) The iMac drive looks at least half again as thick as a laptop drive, so there would be a gap between the top and bottom pieces of the SuperSlim - maybe build a thin wood frame to take up the gap? Four pieces, each about a quarter-inch thick, glued or lapped on the corners. If you want to be *really* nifty, maybe try to do a dove-tail on each corner - but that would require cutting about 2 mm "doves and tails".