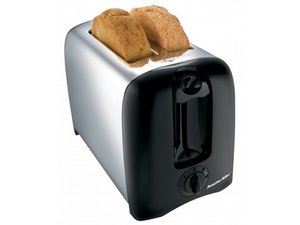 A helpful collection of toaster repair and disassembly guides.

Toaster gets really hot for a few seconds and then shuts off?

I have 33 years old Sunbeam toaster. When you put a slice of bread in the coils get really hot for a few seconds and then shuts off.

Do you by any chance have the model number for your toaster?

There's an adjustment you can make yourself will usually fix these problems. If you turn the toaster over and open the crumb tray on the bottom there's an adjustment screw right in the middle of the opening, on a piece of metal that goes between the two bread slots. Turning that screw one way tightens the mechanism inside, and turning it the other way loosens it up. Depending on what is causing your problem, you might need to be either tighter or looser. The problem is knowing which way to go.

What I recommend to people is that they turn that screw clockwise 1/4 turn, then try the toaster. If it still doesn't work, turn the screw another 1/4 turn and try again. Keep doing that until you've turned the screw two or three full times.

Usually in the process of doing this you'll discover the toaster is starting to work better (or worse). That confirms you're going in the right (or wrong) direction. Then it's just a matter of making the adjustment until it's just right.

It's also possible for crumbs to clog up the works. Emptying the crumb tray and shaking the toaster (over the sink or the wastebasket!) will get the loose crumbs out. Of course you don't want to flush it out with water or anything like that. Just shake it a bit.