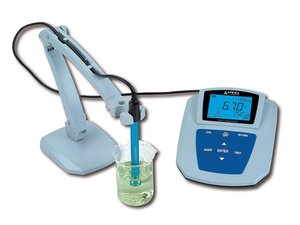 Repair and service information related to pH meters, which allow for the measurement of acidity or basicity.

I am working on a Bluelab Guardian a TDS and PH monitor for aquariums and hydroponics. Total device power is 5v 1 amp. I suspect the previous owner hooked it to the wrong power supply and fried it. No response when supplying the correct 5v 1a

No visible damage on the PCB to make things easy. Many parts of the circuit have active voltage when plugged in which gives me hope it's not a total loss.

While checking the board with power supplied I noticed that the main 44 pin Microcontroller was getting quite hot - measured as high as 170F which seems high to me for such a basic chip.

This chip's model number is "PIC18F2423" - and trying to search through the documentation I couldn't seem to find anything about expected operation temperature so was hoping someone with general knowledge of basic chips like this would have an idea if that level of heat output might be an indication that it's fried. Any thoughts?

Since it stores the programming, if it's dead then there's nothing else I'd be able to do with this circuit so this seemed a reasonable place to start.

While investigating the circuit I did find a DC to DC converter which seems to be dead - has 5v coming in and no output. It's a 4 pin model with no "enable" pin so I believe I should have voltage out. I can definitely replace it just don't want to start swapping components throwing good money after bad if there's a chance the main microchip is fried.

Any advice or suggestions appreciated. Photos of the circuit attached. 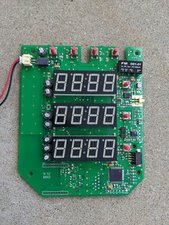 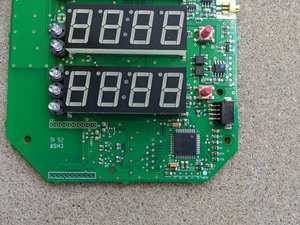 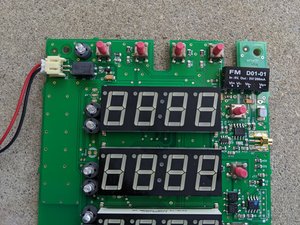 Also 170deg F is toasty it should still survive this. I would be concerned about having short in that IC circuitry

Check your DC-DC converter D01-01. Looks a little cockeyed but could just be my old eyes

Thanks for the input!

I have 5v coming in on the left set of pins and nothing on the right set with no "enable" pin which I believe is sometimes on these converters, so it at least is bad.

I believe it's feeding a sub circuit which goes to the PH meter but haven't been able to verify for sure. Would the main microcontroller likely be able to go into a fail state if a component in a sub circuit like that is bad?

Any suggestions of what I could test with a multimeter to have an idea if the micro controller is or isn't functional?

I have voltage on most of the sounding contact points near the chip.

I guess I could try reading through the specs to try to see what's normal on each pin, but I'm not sure I have the hand eye to reliably test each pin.

Being that it's a microcontroller, it's not surprising to me that it might get rather warm. If you dig all the way to the bottom of the data sheet to the product identification system for that chip, it does list some temp ranges. It looks like there is some variability since the data sheet is for a few different variants of this microcontroller, but it lists temp ranges potentially as high as 125 ℃ (~255℉). And even the variant which has lower expected operating temperatures, tops out at 80 ℃ (~175 ℉), which is within the range you gave, even if only just. That doesn't mean it's okay, but it's not running hotter than it's rated anyways.

If you're going based on the theory that it could have been damaged by improper voltage, I would think your best bet is to see where that incoming voltage goes. What might it have gone to/through. It's hard to tell from the pictures,especially with the large display readouts. But these green PCBs usually have traces that are pretty easy to follow (unless they go to other layers of the board). Check with continuity mode on your multimeter if need be. But there's a chances that that main line goes to the DC to DC converter. In which case, it being damaged is definitely possible.

I would concur with @oldturkey03 though, that having a short in the circuitry seems like a strong possibility, especially if it is getting toasty.

Thanks for the input! I was able to find those temp ranges, but wasn't sure if I should read that as - this is the Max temp this board will continue to operate at if you add it's own heat + extental heat (say its in an engine bay or something that also throws out a lot of heat).

That to me is different than what one might expect in general operations at room temp.

I guess it sounds like what you two have said is its technically within spec and it is within possibility that it is an OK temp.

I can go replace the DC-DC converter which as I mentioned to oldturkey03 - I'm sure it's bad. It's just annoying that with shipping the converter is like $10 from digikey, so if I have to order another several parts after because that doesn't fix it, this device will quickly become less financially worth it to repair. Though I'd probably still try just to learn.

Any ideas on tests I could precorm without an oscilloscope to have an idea if the chip is good?

@salient I see what you mean, but as far as I know operating temp is pretty fixed. Just like a CPU or GPU in a computer. If you're running it in a hot environment, you want to make sure you have adequate cooling.

In my estimation, it's going to be difficult to know for sure that the microcontroller is bad without some process of elimination. The voltage input for that chip looks like it's maximum is 5.5V, so if it was exposed to a higher voltage, it's likely that there was some electrical damage to that IC. But I'm not sure where that voltage comes from, is it from main power or is it supplied by something else?

Looks like VDD (voltage input) is on Pins 7 and 28. I would try and see what sort of voltage is on those specific pins, if you can, and where those lines go on the board. Almost any of the other pins, aside from the ground reference ones (6 and 29) are I/O, so hard to know whether they're working without an oscilloscope. And some idea of what the output means.