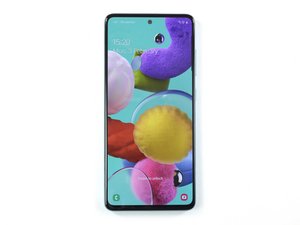 The phone starts up, shows the Samsung A51 boot screen and goes blank

I bought this phone (SM-A515F) which had multiple faults (broken screen, back glastic and camera glass) on eBay in the middle of 2020 and it has been lying in my storage waiting to be repaired, which I did today. I'm fairly sure I replaced the screen right and put everything back into their original places, however when I went to turn on the phone, the Samsung A51 powered by Android screen 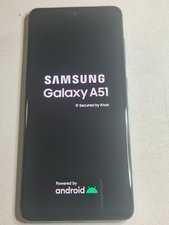 pops up for about 20 seconds and the Samsung boot up chime plays 10 seconds in, however, everything then goes black. When I plug in my charger to the phone I can hear it register, but the screen doesn't display any picture. I'm sure this screen is of high quality since it does turn on at the beginning of each boot and that it is an official Samsung Service part. I scoured online for solutions and what I have found is that this is the “Black Screen of death" and that I need to do a force restart or even a force reset in case a rouge app is causing this. However, the force restart does not work, and I cannot activate the Force Reset sequence. I have looked online and YouTube which tells me that I need to use a combination of Volume Down + Power or Volume Up + Power or any other key combination or key timing. I have tried everything I can think of, and it doesn't work. I would think that if I were able to reset the phone, this would all be fixed(at least hopefully). I'm unsure if I can use a USB-C ~ PC to force reset because I don't know if USB Debugging is activated since I can't even get the phone to fully boot up(and the fact that I don't know what to do). I'm completely out of options and lost at this point, so any and all help will be very appreciated.

EDIT: Been looking on YouTube again, found a video with a guy who has the same problem and it seems like the phone's screen is to blame? https://youtu.be/hfUU5oIYpX0

Edit No.2: I bought a second Samsung A51 (SM-A515F) off the internet and swapped across all the parts between this phone and the new one, everything worked (on the broken phone) including the screen except the motherboard, so my previous edit was wrong. I transferred the broken motherboard from my original phone into the phone that I knew worked with a screen that I knew worked and the same thing happened, so it’s a motherboard issue. I bought a motherboard (SM-A515U) motherboard off of Aliexpress and installed it into the previously broken phone and everything works great. After this whole ordeal I learned 2 things, firstly the SM-A515F and SM-A515U motherboards are interchangeable, secondly this problem was the result of a faulty motherboard. I shall make a 3rd edit if I ever find out the problem of the motherboard.

Quick sidenotes: I wasn’t able to go into download mode or recovery mode on the broken motherboard, I wasn’t able to flash any TWRP software through Odin or connect it through the USB-C connection to a computer. I tried multiple solutions for a whole year with no results. Only solution was getting a new motherboard.

TLDR: Motherboard fault, replace the mother with a SM-A515F or SM-A515U, they are interchangeable(at least in my case) and you’ll be good if you have the same problems as me.

hi.. did you happen to solve this by any chance?! Thank you!

Not exactly, you can read my latest edit for my "solution" to the problem.