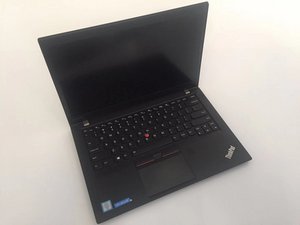 Power button lights up but the display is dead

Whilst the laptop was powered on (plain web browsing, nothing fancy) Windows crashed with a blue screen of death. Subsequent attempts to start it failed. The CPU/Video Chip are from Intel (i7) and they come as a single package with 2 dies soldered onto the motherboard.

The behavior: the power button lights up (green), but that is about all the laptop does. There is no display (built-in panel or external monitor).

What I have tested:

Checking the Lenovo forums there are some users complaining about similar issues, but, unlike myself, they all have discrete graphics chips (usually Nvidia). But i have the built-in Intel chip. Some say that heating up the video chip will bring things back to live, albeit temporarily.

Besides heating up the CPU/GPU combo, do you have other ideas? Some things I could check or a reliable source where I can download the schematics (i do not mind to pay for schematics, but the sites I found online looked a bit dubious…).

Thanks in advance for the help!

Thank you so much for the help so far!

The schematics were exactly what i needed.

What is the status now:

The memory module is indeed faulty because I plugged it into another system and that failed as well to boot.

The fan _seems_ to be faulty. It uses a 5-pin connector:

I can confirm that during POST I have 5v on the DC in and FAN Start pin is pulled up (+5v). GND connection is ok too. However, the fan does not actually spin. The impeller is not stuck (it can easily rotate even if i blow on it with my mouth). I do not think i am capable of fixing the fan. The SMDs are absolutely tiny (majority of them are 0201) and (again) I was unable to find any schematics.

I am thinking of replacing it (approx $40) but then I cannot help thinking about how on earth it’s possible to have two components failing at the same time.

The laptop used to work just fine and it’s a personal device I had for years. One day I’ve started it, all was fine, but after some time all of a sudden it threw a BSOD and then never powered on. I can understand a failure of the memory module. I can understand a fan failure. But I find it very strange for 2 unconnected parts to fail at the same time.

It might be a bad coincidence, but I am also afraid of something else causing these failures.

Any advice/feedback is highly appreciated!

I was unable to repair the old fan. Since the motherboard looked like it was providing the correct voltage, I've decided to risk and buy a replacement fan. This turned out to be a good decision as, after replacing the fan, the laptop booted just fine. I've also put it though its paces and stressed it for a couple of hours and I;m happy to report that all is working fine. Hopefully I will get a few more years usage out of it.

Why exactly both the fan and memory module failed at the same time, I have no idea. Bad coincidence :)

Here are 2 links for the schematics.

I’ve used the 1st link website before for other schematics with no problems .

The 2nd looks familiar but it was a long time ago but I had no problems downloading it now just to see if there was anything untoward about it but it went OK.

Hopefully one of them will help you.

FAN ID (out) I think is the temp sensor i.e. a thermistor connected to Earth (black wire) that is also used to indicate temp to the BIOS so that the fan speed can be increased which is confirmed by the Tachometer out which is a hall effect sensor, to cool more quickly.

Maybe you can see the thermsitor in the fan housing. Measure between the FAN ID wire (fan disconnected from board) and black wire to see if there is a resistance reading

Did you test the fan motor windings with an Ohmmeter when it is disconnected from the motherboard, you didn't say? Measure across the black and the red fan wires.

If open circuit here's a link to the parts for the laptop.

It may be coincidence but the ram and the fan work at different voltages i.e. 1.5V (or 1.35V) ram and 5V for the fan which would make it strange unless there is a problem with the 5V supply but then you would think that there would be more problems.

It may be a case of replacing the fan and the ram and then waiting to see . You could stress test the laptop by playing high end games or running performance tests to see what happens. Either it works or it fails but at least you will know, as trying to find it may prove inconclusive if it only appears under certain conditions

Thank you so much Jayeff!

I've tested the motor windings and they check OK (there is resistance).

I do not think there is an issue with the power supply rails. The fan gets +5V (DC IN) and also the FAN start pin is pulled high (+5v). I have replaced the memory module with one known working one and the laptop starts. But, due to the fan issue, the laptop never makes it past POST.

I do not think I'm able to fix the fan myself. Most of the components on the FAN logic board are tiny 0201 SMDs. On top of this, to remove the fan blade and the motor and logic board assembly I had to break a few tiny plastic rivets (FRU never really intended for repair).

I will take your advice and, once the fan is in and hopefully the laptop will make it past POST, I will stress test it for 16-24 hrs. If all is ok, I will also buy a memory module for it (the one I am using now is on loan).

Many thanks again for all the help!

It could be a dead motherboard. You can try an EC reset: remove your battery and charger, press and hold power button for 5 seconds, then reconnect battery and/or charger and try to boot the laptop again.

Or kindly check out these methods.

Thanks for the answer! I have already recovered the data (by putting in the disk drive in another system).

The motherboard is for sure faulty. Other users on Lenevo forums point to a faulty GPU and that heating them up will restore functionality for some time. I would have tried that, but I do not have a discrete GPU chip. The GPU is on the same chip as the CPU (albeit a different die).

Going to a Lenovo service to get it fixed would cost more than the laptop (already 3+ years old). I was able to find the motherboard online for about $100, but these are scavenged parts and I would rather not risk the money and end up with either a faulty board or a locked chip board from a stolen device…

I hope to get the current board fixed.

@sarlagri Thank you for the update, hope that you will figure it our and fix all errors soon. Happy New Year!