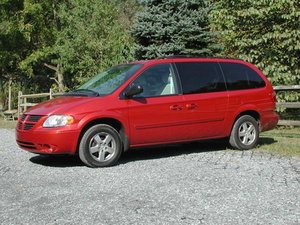 Why does my air conditioner/heater fan only work on High?

Our air/heater fan only blows air when it is set on high. It makes a hooting noise when it first starts like maybe there is something in the way. I have replaced the blower fan relay switch but that had no effect.

These were all excellent. I had to replace both the resistor pack and the blower fan motor. The video on youtube was great help also.

+ I definitely agree with the answer from rj713 and just want to add to it. Remember though that bad resistors can be caused by blower motors with a lot of mileage on them.They build up higher resistance and that extra draw can destroy resistor. replacing the resistor may solve the problem for the short time but may re-occur. If that should happen, you may need a new blower motor. To get to the resistor, open your glove box, squeeze in both sides and let it drop down. You should now see the resistor directly behind there. It is about 3" x 1.5" with a 5/16 screw on each end and two wiring connectors. (one big one small). There is also a thermal fuse that I would replace as well since you are already there and the price for it is minor. It is a thermal fuse that goes bad often. you can fairly easy replace that one with a thermal fuse from Radio Shack or DigiKey has it as well on http://parts.digikey.com/1/parts/726775-.... So you could replace that as well, but it needs to be soldered. for your resistor repair, there is a Video that will help you with it. the part is readily available at places like this Hope this helps, and I did not mean to bump rj713's answer, but can not attach images to comments. So, my apologies. 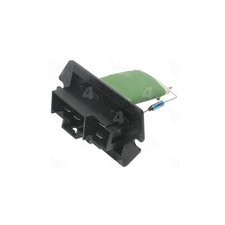 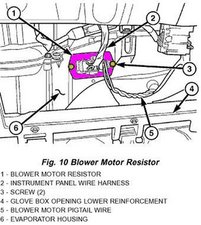 Good information there for anyone with this problem to pay attention to.

Hello All...I have read all of the comments in this string. Very helpful BTW! However, have any of you had a problem with the car stalling at idle after replacing the resistor? I just recently replaced my resistor, but now my car periodically stalls when I'm idling at start up and/or stopped at a light, etc.. Any ideas?

Did you also replace the blower motor resistor? It is a separate part from the blower.

I've had similar problems with my truck. You will find there is a resistor pack that divides voltage to the fan controlling fan speed. High speed bypasses the pack which is why it still works. The startup noise could very well indicate failing fan bearings--that could have caused the burnout of the resistor pack. The pack usually cost about $20 and is fairly easy to replace--look for it near the fan assembly. If you still have startup noise consider replacing the fan motor also or you will burn out the new pack eventually. Either buy a repair manual for your van or check one out from the Library and make a copy of the wiring diagram. Good luck.

+ Good answer. They may also be able to get the wiring diagram and replacement procedures from the Autozone web site. They have a ton of vehicle specific repair guides and diagrams.

replace the blower and the resistor, but it still does not work any idea that can be more, fuse is good and the relay

I find this answer this information very useful. This is what happened to me also.