Will Not Boot Into Leopard After Permissions Fix

Recently, I decided to do a little modification to some of the visual aspects of mac os x, and unfortionatly couldn't access the CoreServices folder, even as a Admin(though I never got around to modifying any files). I did some Googling, and found a way to change the permissions in Leopard (Since everything I have read says that Leopard has a lot of permission issues) I set it so that Myself, and Admin could read, and wright. After i did this, I rebooted the computer, and it seemed fine, it showed the apple logo, but never showed the spinning progress wheel.

I then tried booting into Ubuntu (which is on a different drive then Leopard) and it worked fine, and I could access the disk from ubuntu. I then tried to boot into Panther (Which is on annother drive), and that also worked fine. In panther, I used disk utility, and Used the "Verify Disk Permissions" option, and it gave me a bunch of permissions that needed to be repaired, so i told it to do that (and it took about 3 Hours) After that I also used the "Verify Disk" option, and it said "Block Count Invalid" so I repaired that, and it told me that the repair was successful (I actually did this before the permissions verify, i think).

After that was done, i rebooted the computer, and was relieved to see the progress well spining as the computer began to boot into leopard, unfortionatly, after the progress wheel spun for about 25 Seconds (The ususual boot time for this machine) it went to a black screen, as if it was logging into Mac OS, and then the computer chimed, and rebooted.

So the issue still remains. After booting into panther again, i checked the disk, and all of my files were still there, but that disk had a lot of disk images (For Backup over 10GB of older drives i used to own, and I cannot copy these onto my external hard drive since when i bought it and first set it up, I forgot to re-format it in NTFS, and now it uses the FAT filesystem so no files over 4GB, and it has more space used than any other drive I own) so I cannot wipe the drive. In panther, i can acess the disk, but the computer can't boot off of it.

Here are some pictures of the Babble in verbose mode, and it looks as if it's trying to boot an Intel Mac. 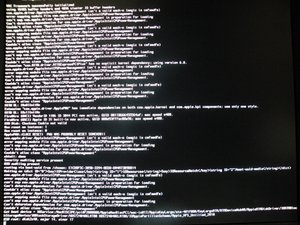 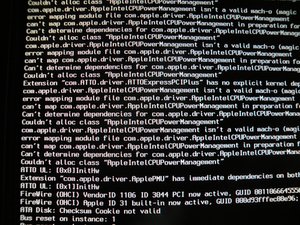 Do you have TechTools Pro? http://www.micromat.com/

I really can't read the babel very well but I do see words like GUID and Intel CPUPowermanagement. What machine was used to format this drive? Did you have it in an external enclosure on an intel machine? Was the MDD being controlled by an Intel machine? Wat is the status of virus protection on the MDD?

I'd back up everything I could on this drive right now onto something that's segregated like an external drive and treat it like it was contaminated.

All Three drives were containing operating systems (Panther, Leopard, and Ubuntu) were always installed in the system, and the operating systems on them were installed in through system, The leopard drive is roughly 3 years old (400GB Hitatchi DeskStar) so i doubt it's failed. It never did occur to me to install security on a mac (Just the mac steriotype I guess) The drives were never pulled out of a PC, One was the Original 80GB in the machine, and the other was from my PowerMac G3 (30GB) and the DeskStar was new, so I'm not really sure how this happened

I just decided to back the stuff up on my external hard drive, and copy the large files onto one of the machine's other drives, and wipe the drive and reinstall the OS, but thanks for the idea of wiping it.