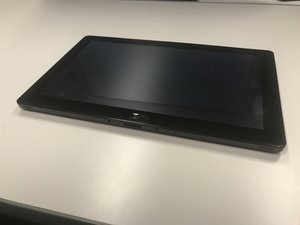 Would this wide black line mean I would have to replace digitizer and glass or just one of them? The touch screen still works.

A black line down the screen would likely indicate the LCD is broken, so you’d have to replace the LCD display itself. If glass is broken, you’ll want to replace that; if not, then don’t. If touch is still working, then the digitizer is not broken. I’m not familiar with that model, but depending on the tablet some devices have the entire LCD + digitizer + glass as one assembly, whereas some have the digitizer + glass separate from the LCD. If that tablet has a single display assembly, you’d need to replace the entire thing; if it has a separated assembly you could possibly get away with replacing just the LCD (assuming the glass isn’t broken).

Wonderful! You have answered my question. They are 2 separate pieces.

you cracked the screen in that spot can’t fix that you can still see out of it right?