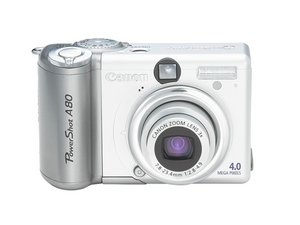 My camera is A810 and is not listed; I have a black screen

I have a PowerShot A810 HD which is not listed above. I had this camera in a box for many years brand new and just now started using it. I’ve been using it for about 3 months now when all of a sudden my screen turned black. The camera starts up, it takes pictures fine (I just can’t see what I’m taking a picture of). The camera turns off and on fine and the lens retracts, it uploads to my computer, but the screen is black. This camera is like new since I’ve never used it. I have read the numerous complaints from other people who have the same problem. I also saw how many cameras were recalled, but for some reason I can’t seem to find this model anywhere. Did I accidentally touch something to cause the screen to turn black? I recharged the batteries and left them in overnight, because I read that the flash has to recharge, but when I woke up in the morning, still a black screen. When I turn the camera on, I could see the screen flashes that shows Canon, but then turns black again. Please help

I have Power Shot A810 HD.. Only i am unable to capture pictures with my camera.. All highlighted option are displaying on my camera LCD & it is showing my previous pictures which is saved in my memory card. But no new pictures is coming. Only date & time comes on captured pictures & black picture comes. Flash light running but picture is not coming. Plz suggest what to do

Can you view the menu screens OK?

If so, check the Display Off setting in the Power Saving menu to see what its’ value is.

No, I cannot view the menu screen. I can't view anything, the screen is black.

Try taking a picture and downloading it to a computer.

I realize that you cannot see what you are taking.

If there is only a black image for a picture, then there is a problem with the image sensor or the motherboard in the camera or both.

If you get an image on the computer then there is a problem with the camera's LCD screen.

What is the model number of your camera?