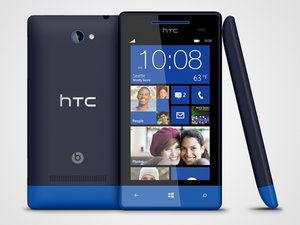 A budget Windows Phone that doesn't compromise on style.

I really need help with my HTC Windows Phone 8s. One or two years ago, i stopped using it, so i powered it off as usual and kinda forgot about it. Now i broke my new phone a couple of days ago and wanted to use the HTC again - but it doesnt respond to anything at all. No matter what i do, it will not vibrate, the screen will not turn on, ne notification LED stays dark.

Then i tried to "reset the charging logic" by pressing and holding down power+vol up+vol down for two minutes as suggested here:

Device will not power on after battery ran dry?

After i did that, still nothing. so i thought, maybe removing the battery could help. so i did, and when i plug it in without the battery the amber coloured notification LED will come on for half a second or so, then go off again leaving the phone unresponsive to whatever action. When i plug the battery back in and then plug the phone into the wall charger again, the notification LED will again switch on in an amber color for about half a second, no response afterwards. However, if i try to do it again with the battery plugged in, the LED will NOT come on again. In order to archieve that i have to unplug the battery and plug just the logic board in. I also tried this with one brand new battery and the original one because i thought the battery might be faulty.

If anyone is able to help that would be very very highly appreciated.