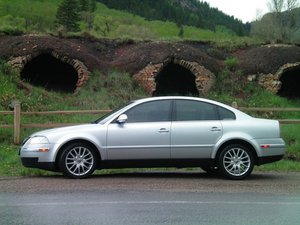 An all-new Passat, based on the Volkswagen Group B5 platform, was launched in 1998 in North America.

My 2005 passat has issues starting in cold weather. Today it is -7. When this happened last year, I had to have it towed. I was told, sparkplugs, and other routine maintanance. I replaced the plugs, did the routine maintanance, and here I go again, not starting. I know it's cold out. The Toyota with 183000.0 miles on it starts no matter what the temp. Any suggestions? Does anyone know why the car won't start?

Is this a gasoline powered motor or diesel?

If it has sparkplugs I would guess gasoline.

I have a Diesel with same problem VW cant find out why.

Dear Britt, there are several possible reasons why your diesel wont start. First of all, a diesel needs to be preheated to start.

There are senors who read the engine temperature and another that reads the air temperature. Easiest proplem would be a damaged temperature sensor. If a sensor is damaged, the electronics think the engine and or air temperature is warm enough and does not preheat. But preheating is necessary, because its cold. A proper VW shop should be able to sort that out.

In some cases the glowplugs, that preheat the cylinders, are damaged. Or the electronics, that control the preheating process, is damaged. A proper VW shop should be able to sort that out.

Next the Diesel fuel itself can cause a problem. If it gets too cold the Parafin in the fuel flocculate and clog the Diesel filter.

Next the combustion might be too low. The combustion of each cylinder should be above 23 bar, between cylinders not above 4 bar.

My last idea is the Diesel pump and the injection valves.

You may have a fuel problem such as moisture in the fuel. If you try to put a bottle of dry gas in your fuel tank you may be able to get the moisture out, which will sometime for ice crystals inside your fuel lines.

You may have to repeat this a few times.

Perhaps this is the simple and cheap fix for your problem

Here is a link about dry gas---my caution would be against using a product with methanol. Some vehicles such as mine can have fuel system problems with methanol but not ethanol.

My be its problem with a C T S , which control the engine when it starting for the first time .

Does the motor turn over strongly with the battery power?

If not get the battery tested.

When it starts and runs does it go as it should?

is there any smoke from the exhaust?

Black or blue coloured smoke could indicate wear or damage in the engine.

If all ok then check the HT leads to the spark plugs, check them for any damage or moisture; these leads carry high voltage to the plugs and if they short due to moisture etc then the plugs will not get the high voltage they need to spark.

So first check all the electrical supply to the plugs; high and low voltage, but start at the plugs and work back towards the ignition key.

Plug leads, coils etc.If its a well used car the ignition switch could be worn.

Dont quit they are great cars.

Ive got a diesel passat with 256000 miles and its still going strong!

There is also an air pump that holds vacuum while the car warms up which is located in the fender. My 1999 1.8t Passat had fuel line issues when the temp got that cold...it would actually leak until warmed up, I guess the crimp was bad or something.

if the engine doesn´t starts, check the air filter, the distribution cap and rotator, the cables to the sparkplugs an the spark plugs. When you turn the key, but doesn´t start, you should hear a low humming noise from the back of the car, that stops after 2-3 seconds. That was the main fuel pump, building up pressure in the fuel lines. If that was all ok, we have a litte problem.

Start up the engine and buy a can of a.e. break-disk-cleaner, now spray, only 0,5 seconds per spray, the air intake in smal steps beginning from the air filter to the throttle body. Spray listen if you hear that the rev. goes higher, no next spot until you hear the rev go higher than you have found your leak.

Forgotten to mention, the oil-coal mixture layer builds up when the car is often or mostly used for short distances like a.e. 10 miles.

Do you know what engine is in the car? That would be very useful information.

The coolant temperature sensor is a common culprit for cold start problems. There could be other causes. If you can find someone who has a VCDS interface cable and a laptop with VCDS software (Ross-Tech), you can look into what's going on with the engine and make a more accurate diagnosis. It's better than buying and replacing parts based on guesswork.

This explains the same problem which I have suffered from too!

Its the ingnition switch and cold weather....read on

Hey I have that Problem, In the am it has no problem turining on, but if I go and put gas, then to turn it on. It wont start I have to press on the gas paddle for a few times. I feel like im choking the car. any Ideas please email me

It seems that the 2001 -2005 VW passat was not built right in that respect, at least, and should be recalled to be fixed properly. I made a mistake and got a 2003 passat, have the same trouble, and may never buy VW again because of it and the fact that they ignored their mistakes and made all of us suffer as a result.

Replace the battery. Buy the right size, and avoid the cheaper brands. You will get your cold-crank amps back, and it will turn over just fine in cold weather.