Repair guides and support for your Samsung TV.

Will not turn on, no red light

I have a 65" UN65JS850DFXZA Samsung TV that will not power on. There is no red standby light. Nothing happens. Any suggestions would be great. It is not the remote. The set has power. I have unplugged the one connect device. I have left the set unplugged for hours. Still nothing.

I have tried what you suggested. There was no storm or power surge. There is power going to TV. the power cord goes from an outlet to the TV.

I have this same problem too. Please help me. I was watching television and suddenly Samsung TV shuts down just now. I tried to turn it back on bug nothing happened. I pull off the cord and put back in and turn off/on switch. Nothing changes. Please help me. I'm so gonna get kill by my mum. And the TV haven't reach one year.

The same problem. When I plugged in the usb, it did not show the files on the screen. Then I plugged the usb out, suddenly the tv shut down. And when I tried to turn it back on, it did not. And nothing happen. I tried several times but it's still dead. What might be the problem and how can I fix it?

My samsung smart tv done the same and its only 4 weeks old..fine one minute and switched it off..came back a few hours later and its dead..getting a replacement tommorrow

lainiest if you have guaranteed power to the set it is likely you are having an issue with the power board. You will have to unplug it and remove the back of the set. Then check the power board for any blown fuses or other components. You do want to post pictures of your boards with your question so we can try and assist you further with that. For that use this guide The attached image should show the fuse on your power board. Check for continuity and see if you get power to that, once it is checked. Unplug your set to check it for continuity. Then plug it in and use your meter to check for power. 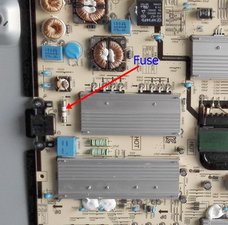 Erm...this is great if you know what the heck you're talking about lol what about advice for us novices?

Cass Ababio but that was for novices :-)) What make and model is your TV? What are the symptoms? What have you checked? What tools do you have available (multimeter etc.) and what are your abilities? I am more than willing to guide you through things step-by-step.

This statement about continuity is not accurate. Verifying continuity means that you are checking to make sure there is a complete electrical path/connection between 2 points with minimal resistance. And on these size fuses, you will most likely see resistance around 0.1-0.2 ohms. That is important because you can compare the fuses against each other. If 2 of them give you a resistance around 0.2 ohms and the other shows 40 ohms per say, I would go ahead and call that a bad fuse even though you were able to get some kind of reading through it. You will also need to remove one side of the fuse from the circuit in order to accurately measure the resistance. Other wise you can get a false indication of a “good” fuse.

year old 4k Samsung 0693CZH70060F tv power wont turn on what size tool do u need to remove the back plate to access the power board Already plugged it in and unplugged it held down button 1 min to remove any residual power Just like u would a lap top or phone what size socket do you need to remove the back plate. Also if it is the fuse how do you replace it seems to be fused in and not a easy replace based off the Picture.

Hi, Was there a storm or blackout between the time when it was working and when it wasn't?

Is the power cord connected directly to an outlet or does it come via a powerboard? How have you proved that the set has power?

Holding the power button on when there is no power supplied to the TV allows any "residual" power that is in the TV to dissipate.

By doing this what is hoped will happen is that if there is any corrupted data (caused by a power surge for example) which prevents the firmware from functioning correctly will be deleted (or lost) and the TV will revert back to a default operating condition. Obviously this can't happen if the power is still connected to the TV

You may not believe this but it is usually the first thing most electronics techs (and help centres) do as it can resolve a lot of problems. It is known as a "power refresh" and it can be surprisingly effective in a lot of cases.

Thank you, jayeef! Your solution still works for newer Samsungs, too!

This unfortunately did not work for mine. I am at a loss :-(

On the power board, there is a relay (its what clicks when you power on). If you tap on the relay (becareful , use the plastic end of a screwdriver), the power should come back on. The relays are crap..

Hi, my tv was unplugged for the weekend then when id tried to plug in it wouldn't turn on. My hubby has opened it up and checked there seems to be no problem with the fuse but he says there is no continuity as the treading has worn off or something like that. Problem is he says he needs to solder the board but he has tried using the thick solder wire which isn't taking. I've been waiting a month now missing all my shows for him to sort it out. Is there anyway I can solder it with the thick solder myself? I'm tired of begging him to get proper wire or to fix it for me.

Melicia H you need to let us know what make and model your TV is. After that tell us where and what your husband wants to solder. How thick is the solder? You soldered before? "no continuity as the treading has worn off " explain this a bit better.

Hi. My problem is exactly similar to what is posted above. my Samsung TV went off abruptly and since then the red signal light doesn't come on, I have tried all that is mentioned above, checked the fuse and it was continuous, tried to hold the power button for 30seconds with power cord off and with it on and even tried to gently tap the relay but still no success. Help.

Tv turned itself off after watching it for 20 min. No red light. Tried all those tricks above and nothing worked. Warranty just ended last month. And it’s Good Friday. No chance of getting anyone here for days. Model UA60J6200AW. Help!!!

I have a Samsung TV that has a touch screen power button. It worked perfect until we unplugged it to move and now it will not turn on. No red light at the power button. We have two of the exact TV doing this.

Did you try a power reset, you didn't say?

Switch off the power outlet (if it has an On/Off switch) that the TV is connected to and disconnect the TV power cord from the outlet.

Press and hold the TV’s Power button for 30 seconds to dissipate any residual power from the TV.

Try to turn on the TV.

because I was wrong…the red light is on. Sorry & Thank you

@jayeff , I have a samsung UN50MU6300F that suddenly turned off. We tried to turn back on with no luck. Unplugged...did not turn back on. I cannot locate a power button to do the power dissipate. Any thoughts on what to try next?

You may have to follow the directions as supplied in the Chosen Solution above.

I don't know your model but if it is still covered by the manufacturer's warranty go the warranty route first before removing the back off the TV.

I have tried everything you said but no respond of the red light and my TV is 4 weeks... please help.

Have you tried the TV control buttons instead of the remote control?

Do you mean that the TV is only 4 weeks old from new? If it is call the manufacturer's customer service as it will still be under warranty

Other than proving that the TV power cord is faulty or not by either disconnecting it from the outlet and the TV and testing it with an Ohmmeter or trying a compatible replacement cord, there are no other options except than to take down the TV from the wall and remove the back cover so that the power board can be inspected and tested.

Here’s an image of the power board, showing the slow blow fuse (white glass fuse) and the surge suppressor (green MOV). These are the components that usually fail if there has been a power surge due to a storm or outage. If the fuse has blown replace it with an equivalent slow blow fuse (rating marked on board near fuse and also on fuse end caps e.g. T5A 250V. The T=Timed which means slow blow. If you insert a standard fuse of the same rating it will blow straight due to the high inrush currents when the power is first connected, whereas the slow blow will hold until this current has subsided. We are talking 1-2 milliseconds here for it to subside.

If the fuse and MOV test OK then connect power to the TV and check if the Standby voltage is appearing on the connector test point as highlighted i.e. 7.5V DC. If it is then it may be a mainboard/power board cable problem or a mainboard problem as the mainboard turns on the red standby power light if it is receives the correct voltage signal from the power board.

If there is no 7.5V DC standby power at the test point then it is a power board problem.

Be safety aware when working in the back of a TV when the power is connected as there is exposed lethal AC voltage on the power board. If you don’t know what you’re doing, then don’t do it. Call an expert to fix the problem. 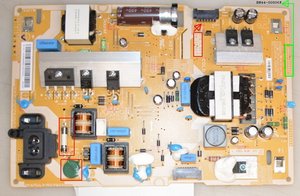 I’m assuming that this image of the power board is the correct one for your TV as it is the one that turns up consistently when searching online for Samsung un40mu6290f power board. Just something that you might want to double check if you determine that it is necessary to order a replacement power board.

Thanks @jayeff had power after small storm was gone last night on some 10 year old HD Samsung model I still use in bedroom. No red light this morning. Power reset worked fine. Appreciate the help!

My Samsung TV sensor shows light when turning on then light goes off immediately leaving remote not working. Please help

My Samsung tv Q95A sunddenly shutdown by its own. No electric cut-off , not even storm. The red doesn’t turn on as well ?

I did try to push the power on for 30 seconds or more but it didn’t work. Please help

Every time I’ve experienced anything like that, I finally figured out I just need to pull the plug, do the 20 to 30 second wait, and plug back in. Always works for me.