Is there a DAC in the lightning to 3.5 adapter

Will you be including a teardown of the adapter? to reveal if there is a dac/amp in it

Of course there's a DAC. The lightning port is digital audio, headphones are analog. Therefore, you need a Digital-Analog Converter.

Time to go and get one and tear it apart so we will all know for sure.

I've had my adapter since Thursday, if I'd known that iFixit was going to take this long, I would have ripped into mine Thursday and published the results on my blog!!

Even if it wasn't their top priority, the minute the found that third audio amp on the logic board, I would have dropped everything and cracked that adapter and EarPods open and confirmed my horrible suspicion that Apple has updated their MFi specs to allow something they've previously prevented -- which would be huge.

Based on logic, it is CERTAIN that this thing does include a DAC, why?

This adapter works on every iOS device since iPhone 5. If there are modifications allowing iPhone 7 to output analog signals through Lightning, the modifications certainly cannot be on iPhone 5. So the DAC has to be inside the connector.

All you need is a Lightning interface chip/DAC combo, which can be put inside the Lightning plug, then the front amps for headphones, which are usually on the audio jack flex (check iPhone dock flex assembly or iPad mini audio jack assembly). It may be a challenge to shrink them to fit into this adapter, but it is still possible.

I'm more interested in audio quality though. Can this thing be at least on par with regular iPhone audio jacks?

The following is the lightning interface chip "Tristar" on iPhone 5. There is no analogy audio signals connected to the chip, so it is not possible to output analog audio through Lightning at all. 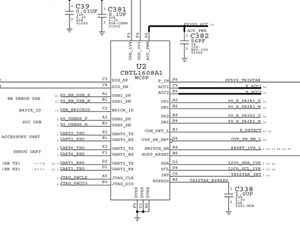 I don't have exact technical terms for the specs but I have a real life comparison test based on an iPhone 7 and an iPhone 6 streaming to Bluetooth connected to a Cambridge Audio amp and decent speakers. The iPhone 6 sounded much clearer than the iPhone 7, playing iTunes or even Tidal streaming Hifi. Based on this, I don't use the iPhone 7 for music when connected to my home audio system.

My opinion is that by removing the headphone jack, it also degraded the quality of music outputting thru Bluetooth.

I think there are advantages to removing the headphone jack but it definitely degraded the music quality of the iPhone.

If they offer the Lightning digital audio datastream protocol to the public, it will be a massive improvement for audio, as long as the downstream DAC is of good quality.

What does the adapter plug into?

@mayer one end in the phones lightning port and the other end is open for the 3.5mm headphones :-)

So It appears the lighting port does support analog audio. Which was the point of my question.

The Lightning port absolutely supports analogue audio. Apple just has not published the specs for it, nor allowed it under the terms of their current MFi licenses. Apple can and has changed their MFi specs as it suits them. I had to upgrade to iOS 10 before the adapter would work on my iPhone SE, which shouldn't have happened since Apple has published Lightning audio specs. That shouldn't have been necessary unless Apple has changed something.

If this thing has an analogue output from Lightning, it is a HUGE deal with major ramifications in the MFi accessory market. Not to mention potential confusion in the marketplace over what a pair of "Lightning" headphones actually means.

There apparently is a DAC as shown in this video.

Can anyone verify the chip numbers? I can't seem to find anything.

Judging by the number, it's an Apple custom chip, of course you can't find anything.

Lightning is software controlled smart port. It is totally capable of routing any signal the iPhone can produce. So a simple software update will support whatever changes to Lightning Apple introduces. When I plugged my Lightning headphone adapter into my SE, I initially received the message that it was not compatible, which required me to upgrade to iOS 10. That would not have been necessary unless Apple changed something about their MFi specs, as they already have published specs for Lightning audio. So it should have just worked. The fact that it didn't means Apple wasn't following their own MFi specs, or CHANGED them.

There is no difference in the sound from my headphone jack to the adapter. Since we know the iPhone 7 uses the same DAC chipset as the 6s, that would seem to suggest they intend to output a higher quality analogue signal than the iPhone 7 actually needs. The presence of 3 amps is highly suspect as well.

However the port interface chip 'Tristar' on an iPhone 5 clearly does not have ANY analog audio signals connected to it. So if Apple can make the adapter compatible with iPhone 5 through a software update, they either would have to be able to upgrade the Tristar chip firmware to add DAC and output analog audio signal to Lightning, or put the DAC into the adapter.

Which one do you think makes sense and actually possible?

Well, if that's true and Apple has not found some clever way around this, then I can assure you that the audio quality is identical to audio jack, suggesting that the DAC chipsets they are using on the logic board are entirely too large and they could save themselves a lot of room. Guess we'll have to wait for the teardown.

On an iPhone, the audio chip has to handle codec and DAC, so it's ok to be bigger. Also apple may have designed custom chips for the adapter, with just the Lightning interface and DAC, so it can be smaller.

No,I thought there do not have DAC inside.

This Lightning to 3.5 adapter most like analog signal bypass adapter.

I don't have evidence but my point as below :

1.There don't have enough space can put USB to I2S to Analog chipset.

The audio out put of the Lightning female is Analog signal.

This accessory also can work with Apple original Lightning to 3.5 adapter & headphone

If Lightning to 3.5 adapter include DAC ,how it can work with Belkin's new product?

No. If you pass analog audio through lightning, you have to route the signal to Tristar first. It is for certain that it is not possible on old devices. So the audio signal through lightning has to be digital and the DA conversion is done in the adapter.

Are you 100% sure? It seems to me that the Lightning interface could be totally bypassed with 4 channels of analogue audio being tied in anywhere after the Tristar. A firmware update is not out of the question either.

Yes. There is no possiblility to route analog signals into Lightning anywhere on the board. The board is simply not wired that way. It is VERY unlikely that a firmware update can add new functionalities into Tristar, hardware cannot be changed. Do you get water resistance on old iPhones if you upgrade to iOS 10?