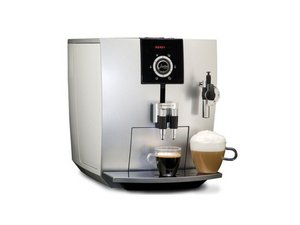 Jura J5 Interesting problem with no water and no Fault!

Hi All. I have purchased a Jura J5, with a fault. Well technically it dosnt show a fault.

Original owner said was running fine then one day was leaking water from the bottom. and no water/coffee brew was coming out of the nozzles. The original purchaser (a company) gave it to an employee and bought a new one.

The employee tore it down and changed a piece of tubeing (i dont know which one) and now now it dosnt work.

You turn it on and it does its normal thing. It starts up and when it says ready, it grins beans drops it in the brew group, compresses it and dumps it in the waste tray almost dry and no water from the nozzels at all. Capp Spout is working fine with water etc. The nozzels you can hear it burbling, but nothing comes out. The machine is now leaking hot clean water all over the bench.

You can hear, that the machine is doing exactly and sounding exactly as it should. the pump is going the grinder is going etc.

Before (and still now if i put it back together) there is no fault code.

There is no obvious blockage. There is no damaged pipes that i can see, no water leaking now anywhere.

Right so the interesting thing is: when i dissassembled the machine I found two things.

Step one two and three show a white formed plastic part with a hose attached. I dont have that. neither the hose or the white plastic part or the nozzle that attaches the hose to the brew group. I just have a arm that goes over the big hole in the top of the brew group. There is a spot that a hose joiner can go, but there is not one there. (if i can upload a photo i will¬!)

Link to tear down

If I had a hose diagram i would be able to check where it is routed wrongly!

At present i can trace the water tubing from one item in the machine to the other, and all looks same in the images on the teardown that i can see. I can only assume it is from the very point that the water has to go into the brew group?? I can see a position where the drainage valve at the bottom of the brew group lodges into a socket that goes to the other side of the machine. I (think) that is where the water comes from?

Ok. Well Heres hoping all will be well, i dont have enough experience with how the machine is working to know where to look next. any ideas and also advise would be greatly appreaciated!

I’m having same issue. Machine is working, grinding, but no water is coming out. I just see some steam. Trying to trace it. Frustrating. Did you ever figure it out?

when there is NO Drainagevalve the water can not go through the brewgroup.

in this link: the hose brings fresh hot clean water,

in picture ONE the part in the white circle lets the water into the brewgroup dock.

The side where you can see the spring is the middlewall, behind that wall is the elctric magnet. sorry for my bad english, was not best at school. XD

I have a Jura Impressa J5 (two actually as I like to keep a spare) which intermittently exhibit the same symptoms - it goes through a brew cycle but no water comes out the spouts but goes into the spill tray instead and the coffee grounds in waste bin feel dry to slightly moist only.

A quick test is to press the centre button of the machine’s control knob so RINSE appears, then press the button again to do a rinse cycle. If water comes out to the coffee spouts then the Brewgroup is connecting successfully and water is passing through normally, except that( in this particular case) there are no compressed coffee grounds restricting the flow of water.

During coffee brewing, the water has to pass through the compressed block of ground coffee as well as the stainless steel mesh filter at the bottom of the plunger and this builds up with more pressure from the pump to push its way through, however, the water comes in through the Drain Valve assembly at the bottom to the Brewgroup, and this valve has two conical rubber seals to hold in the pressurized hot water in, and direct it up through the Brewgroup, and if these seals are weak or there is too much additional pressure in the Brewgroup due to a partial blockage, or coffee grounds that are too fine, them the water bypasses the seals in the Drainvalve and enters the lower water tray.

If you are watching a Youtube video on dismantling the Brewgroup for cleaning, then check the seals in Drain Valve assembly and replace them if necessary.

Remember that if your Rinse cycle has water coming out of the drip spouts, as it should, then your Brewgroup is connecting properly at low pressure, you have to address the issue of the with the high pressure of brewing leaking passed the drain valve.

I hope this help to clarify things.

Chris, what does it mean if the machine fails your test, and water does not come through the coffee spouts in the Rinse cycle, but comes out through the Drain Valve assembly into the tray below the machine? I have dismantled and cleaned the Brewgroup and Drain Valve assembly, and still get no water out of the coffee spouts, either in rinse or brew cycle. TIA

Why would the drip pan fill with excess water? Seems like after about 5 drinks the drip pan needs to be emptied. Is this normal?

Did you get a solution to this. Changed brew unit for a fully refurbished one and still got same problem

I just got my impressa J9 going after experiencing a similar issue. I found that no water was moving through the system whatsoever and confirmed by removing the outlet hose on the pump and seeing nothing come out. I confirmed the pump was the culprit by taking the inlet hose to the pump off and sucking water through the flowmeter and heat exchanger using my mouth.

I took the pump out, but there really isn't too much to see. I was thinking the pump simply lost it's prime and couldn't get started to pull the water through the system. I decided to submerge the inlet port on the pump with no tube on it into a glass of water and turn it on. Once I did that it all came to life. Reassembled and now it's working flawlessly!