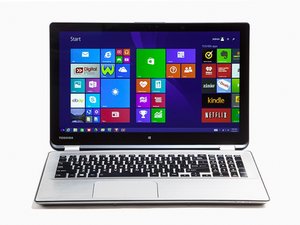 Repair guides and support for the laptop/tablet hybrid in the Toshiba Satellite Radius series released in 2014.

I bought the Toshiba Satellite Radius P55W-B5112, that has a 360 hinge so it can go into tablet mode. The hinge broke within four months of owning it. I sent it to Toshiba. They said its my fault that the hinge quit after four months not their $@$*!& manufacturing. They also said that it would cost far to much money to replace the hinge and the back of the screen.

I've fixed a broken hinge before on a previous laptop so I'm not afraid of buying the parts and taking it apart. Last time I had a manual that I could follow and a youtube video, but I can't find anything.

I'm in the middle of fixing one of these too. My sister's comp. Ordered in the replacement hinges and all is going well except for one problem. It's taking sooOOOoo darn long that I've forgotten how to feed the wires around the hinges. Very few picts of those wiring paths are out there. Especially when it comes to removing the long thin plastic edge cover for the fan. I don't want to pinch those wires. So, whatever you do. Take LOTS of picts of the wiring paths so you can put it all back the same way. Also, it didn't seem necessary to remove the MoBo although I did to do that job. Oh, and I was replacing the back cover too. Now that I've found this site, I'm hoping these picts will help me to get the wiring back the way it should be. Good Luck to you!

My wife's Toshiba Radius is showing the same symptoms. The screen is separating from the cover like the glue is failing.

This isn't the first problem she's had with it. The previous problem is that it would reboot unexpectedly and the touch pad stopped working altogether.

I have the same problem. But only after I got the screen replacement. It refuses to stay together. It will snap on and appear tight, but as soon as I open it, it comes apart. Any suggestions??

It took me a full nine months of fighting with Toshiba and lodging a complaint with the California Attorney General's Consumer Affairs office before Toshiba would honor its warranty. They replaced the computer finally.