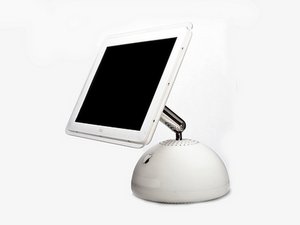 Is the processor dead?

I replaced the harddic and more memory. For a short while is was running now it is doing nothing. I switch it on, you can hear the van? But the monitor is black and nothing else is happening.

I guess, the processor did die due to less cooling paste.

What could I do to reawaken it. In an other post I read that it would be possible to get a core 2 duo bord in. Would this be a solution thats under the range of a new mac?

I only want to work with OSX!

it's possible that the cpu died, but let's think about other possible problems.

does it anythig besides the starting fan?

does the hdd makes any noises?

what about the optical drive?

it's possible to place something inside the iMac - but the only thing what stays "mac" will be the casing - the lcd panel, the optical drive, the hdd - everything will be removed.

surely it could still be far less expensive than a new mac - but that depends on the used hardware.

those "hackintoshes" are almost working like the original ones (also depending on the hardware) - the board i've got for my iMac g4 project is from an aopen digital engine - it has 2 vga out, hdmi out, 4 usb 2.0 and so on - i cloned an 10.6.3 installation on a new hdd, installed chameleon and that was it - the easiest "hackintosh" i ever made ;-)

the only problem is the osx eula! (but since i own a few licenses - i don't care & they have no chance to sue me in germany)

there are many possible ways to get the job done - some are not that great - and others work like a real mac - the only difference is the missing apple EFI on pc boards, but thats why i use the chameleon bootloader

yes it is Deutsch.

No, ist is just starting, nothing else. You can notice the very fine vibration.

The HDD seems to spin, no noises (almost noisless) it is a new one.

The optical drive I never had any problem. Whether it is working or not WHO knows without being able to start the machine?

I would not mind or care that it only looks like MAC, if I work with MAC OSX. I hate the stupid WIN.

O.k. I am going for a HACKINTOSH.

good chioce, there are sometimes very good hackintoshable boards on ebay - i paid for mine 60€ (cpu included). if you need some help with that - contact me: markus.weiher@gmx.de