An easy to use home Espresso machine created by Saeco and rebranded for Starbucks. This machine is excellent for every day espresso drinkers and has an excellent build and product life.

Extra part while reassembling my portafilter.

Help. I think I have everything correct on putting my portafilter back together EXCEPT: on large c-shaped metal wire/ring with on end looped and the other bent up. Where did that come from??

I have checked all charts online I could find. No luck!

Thank you, Leo! I couldn't find an enclosed picture for reference, but I think your explanation should walk me through it. I appreciate your time. 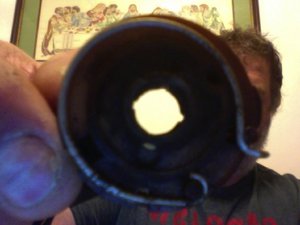 Sorry about the picture problem, it wasn't in the correct resolution. The picture is now enclosed as it should be. Glad to be of service. Oddly, just reading this post made me disassemble my portafilter assembly, and it was pretty dirty, so I cleaned mine too. You see, not all problems are problems.