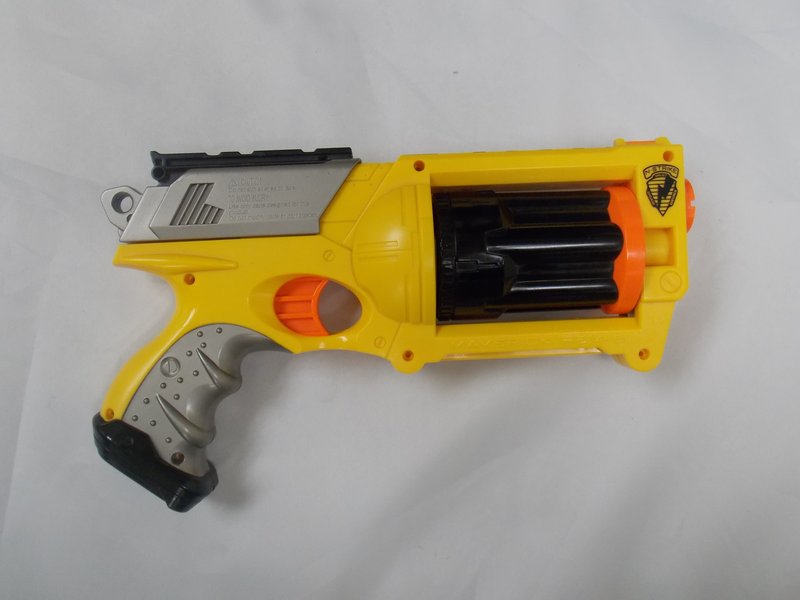 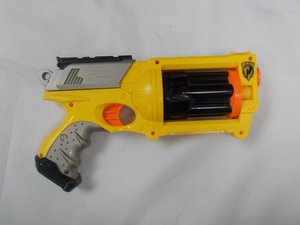 The Nerf N-Strike Maverick is one of the most ubiquitous models in the company's line up.

No matter how hard you try, your nerf gun won't cock.

The catch is an internal piece that catches the plunger when you cock the gun and releases it when you pull the trigger; the resulting rush of air is what propels the dart. As a relatively small part, made of thin plastic, the catch is particularly prone to wearing out after heavy use. Once broken, it must be replaced for the gun to function normally again.

Your gun will cock, but when you pull the trigger no bullets come out.

The plunger propels the bullets by air pressure. Often times after disassembly, the plunger can become misaligned with the holes in the barrel. Simply repositioning the plunger so that its air flows directly into the barrel will solve the problem.

The plunger is made up of two tubes, one inside of the other. The outer tube is pulled back when the gun is cocked and forces air out the inner tube when the trigger is pulled. There is an rubber o-ring seal between the two tubes which forces the air to flow in the correct direction. If this seal fails, the air will not reach the bullet with enough pressure to fire. If this happens, the o-ring must be replaced. Home centers should have the appropriate size in the plumbing section, or a rubber band may be used as a substitute.

The spinning part that holds the bullets is stuck.

Using WD40 to lubricate the axle which the cylinder is resting on. Sometimes the cylinder will rub up against other parts of the gun if it isn't aligned properly, and spraying WD40 in these areas can make the gun work more smoothly and minimize any damage caused by friction.

Making sure that the cylinder doesn't have dirt, or anything that doesn't belong on the gun can be a quick fix. It's easy to get a small rock or dirt stuck in many different places of the gun. If a bullet doesn't leave the gun, but you hear it shoot the bullet, the bullet may be wedged somewhere in the gun causing an obstruction.

If neither of the above suggestions work, check out the Chamber Replacement Guide.

No matter how much you try, the trigger won't respond.

The Trigger is Jammed

Typically when the trigger is not working, it is usually jammed. The simplest fix is to make sure the trigger is being pulled all the way back in the barrel.

Once you have made sure that that trigger has been all of the way extended, ensure that the spring is working properly. If the spring has been damaged or broken, you will need to replace the spring which is located inside of the chamber

Don't point it at your eyes!

When the bullets are stuck in the chamber, the easiest solution is to ensure you are using the correct size dart for the Maverick-6. If the darts are too large or too small for the gun, it allows them to get stuck easily. Replacement darts can usually be purchased if you do find that the size of your darts does not match the size of your gun.

When pulling the trigger back and the darts still do not leave the chamber, be sure the chamber and/or barrel are not being blocked by your hand(s). You can determine if the chamber or barrel are blocked if you cannot hear or feel the air escaping from the gun upon firing. Ensure that your positioning is one that allows the air to escape, which pushes the plunger and allows your dart to escape the gun.

i looked for the advice every where and the spring that helps it calk back is not there please help me find where i could by this for a cheap amount thanks.

The nerf mega Centurion gun will fire the bullet, but the bullet wont fully come out of the barrel. How do I fix this?

I disassembled my Nerf Maverick to remove the air restrictors to make the darts fly farther, but when I put it back together, everything was wrong. It stopped firing, the slide doesnt retract into place, it just slides around, and when you fire it sounds like plastic hitting plastic in there. I am afraid if I try to take it apart I will further damage it. Any idea how to fix this? I want to know what I'm doing before I do it.

Hey guys! I was replacing the stock spring on my boy's Elite Alpha Trooper (CS-12) with a 7kg spring:

as well as the trigger catch spring.  I took it apart to replace, as a few websites have shown.

1.  the cocking sleeve is stuck in the forward position

In an effort to make things right, I put the original springs back - but still the same problems.