Sam has been with iFixit since 2019 – first as a Warehouse Kitter, then as a Technical Writer. Outside of the office, Sam enjoys repairing and riding his bikes, playing guitar and piano, and is a student pilot.

I’m Sam, but I go by “Samo” around the office to avoid confusion. I joined the Tech Writing team in August 2020!

After graduating from Clear Lake High School in 2013 I moved to San Luis Obispo to major in Aerospace Engineering at Cal Poly. In the beginning of my sophomore year I learned about the ultimate secret to success—dropping out of college. Cal Poly’s motto at the time was “learn by doing,” so I decided to start doing more doing and the learning has always followed.

I was hired by iFixit in February of 2019 as a Warehouse Kitter to assemble repair kits before climbing aboard the Technical Writing team. As a Technical Writer I have created hundreds of iFixit guides for everything from smartphones to cement mixers.

Bicycle repairs are the most satisfying of all to me. They are generally simple and once finished you can hop on and enjoy the fruits of your labor! My favorite fix of all time occurred during my first mountain bike race. My front derailleur cable snapped, leaving me stuck in a gear too small to race with. With a portable screwdriver I was able to reattach the cable, shift into a larger gear, and finish the race! 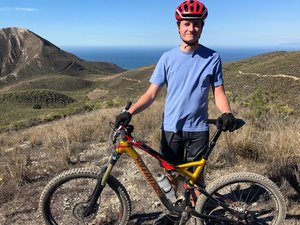 I grew up in a beautiful, one-stoplight, bass-fishing town called Lakeport. All my life I’ve been interested in the sorts of machines that are an extension of the mind and body. Of particular interest to me are bikes that make me faster, computers that make me smarter, and instruments that make me . . . louder.

Currently I am a student pilot pursuing a lifelong dream of searching the skies for this so-called “limit.”

Where Else to Find Sam

The Technical Writing team works hard to make iFixit the best source for repair. Learn more about the content review process that makes it possible.

How To Solder and Desolder Connections