Note: The transcript below comes from a shooting script for the video above; it may not perfectly reflect the dialogue of the video.

Like the rest of the company, Apple’s wireless earbud teams have been busy this year.

Creating the successor to the world’s most popular wireless earbuds is no small feat, but that’s exactly what the AirPods 3 team was tasked with.

And then, off in a warehouse somewhere, probably surprised there’s someone from Apple still signing their paychecks, is the Beats team.

They were apparently tasked with creating a pair of earbuds better in almost every way than the 250-dollar AirPods Pro, for 50 dollars less.

But are they better in the way of repairability? Well, that’s what I’m here to find out today! In this dual teardown video we’ll be taking a look inside both of these earbuds, and talking about the Spatial Audio feature that’s new to the AirPods 3.

I’ll start with the beats, since they’re (surprisingly) more complicated.

As always, I’ll be putting these into a vise, which will deform them enough to break the adhesive seal that holds them together.

This isn’t the ideal way to open any device—not everyone has a vise, and more importantly, putting this much pressure on the plastic shell of these earbuds can easily do permanent damage to them.

The better buds we’ve seen use more flexible plastic and light adhesive that makes this process easier, but even those still require this delicate dance.

I’m still waiting for my dream buds that have a reusable gasket and visible screws. I guess at this point I’ll just have to make them myself.

Okay back to beats. Once I have an opening, I can use a pick to slice through the adhesive and separate the two halves of this pink bud. Inside, it’s organized chaos. There’s a giant battery sandwich in one half, and two fragile cables trailing off to the other.

There’s not really a clean way to separate any of this, so I’m going straight for the battery sandwich. It’s unfortunately a booby trap situation—The flex cable connecting the circuit board to the battery will break if I pry under the battery, but I can’t remove the circuit board because the clear plastic bracket under it is bonded to the plastic shell.

After some careful glue slicing, I can separate the circuit board from the plastic bracket

Once it’s loose, I can hit the two solder joints with my soldering iron and then carefully pry the battery out from between the driver and the bracket.

That wasn’t the worst, but there’s a lot of room for improvement here. While we’ve got batteries on our minds, let’s hop over to AirPods real quick. These are interesting.

The AirPods 3 require more clamping force to separate, and the plastic is more easily deformed by my opening pick. Inside, I’m met with a similar mess of cables—one of which I accidentally snap trying to get this shot … oops.

But! There’s some good news in here. Check this out.

Under this adhesive—which I can remove by carefully twisting it around a pair of tweezers—I can pry up the battery, which appears to have a complicated connection to the cables underneath it.

But after some careful separating, you’ll see that this button cell has a built-in plug! These two prongs slide into sockets on the flex board underneath the battery like a tiny plug.

This is honestly pretty clever. Round of applause for the design team here, who, even though repairability wasn’t their goal, thought of a foolproof, efficient way to connect a button-cell battery to a circuit without solder. You just … plug it in! It’s so cool. This will at least make recycling these things easier, I hope.

Unfortunately, batteries are pretty much the only things you’ll get to in either of these buds without doing some serious damage.

And honestly, that’s not the end of the world—in most earbuds, the battery is likely the only thing you would need to replace. Though, being able to open it up whenever you want and clean out earwax would be nice.

Only one pair of buds we’ve seen have been easy breezy all the way to the speaker drivers and charging contact pins—the Galaxy Buds Live. Long live the beans.

For science though, let’s dive into the stem of this AirPod to find the H1 package that makes Spacial Audio possible.

Since I already snapped a cable and this thing has been a royal pain, I’m going to take the easy route and use our ultrasonic cutter for this part.

I’ll spare you the noise this thing makes, but just imagine the sound of a mosquito buzzing in your ear that’s so high pitched it makes your teeth hurt.

Inside, we can see a few chips—likely an inertial measuring unit and an accelerometer, and the silver H1 package. This is where the spacial audio magic happens.

So let’s talk about spatial audio, because this is extremely interesting to me.

If you don’t know already, spatial audio is designed to trick your brain into believing that the music or movie you’re listening to is coming from a certain place in the space around you.

You can see, like in the AirPods Pro, there’s only one driver here.

What’s happening is the H1 chip takes the audio file your phone is passing it, and introduces a delay between the two buds in your ears, so one bud is playing slightly ahead of the other.

This effect mimics what happens in real life. When you hear a sound to your right, your right ear hears the sound a fraction of a second before the sound wave travels around your head to your left ear.

So by carefully calculating the time it takes sound to travel to each ear from any point around the head, then putting that data into an algorithm, Apple can use the H1 chip to precisely add delays between the buds to place sounds in space around you.

Then, using the inertial measurement chip and the accelerometer in each bud, the H1 chip can sense which way your head is turned and adjust the sound so it still sounds like it is coming from your iPhone, iPad, or Apple TV in front of you.

I should mention that I’m not an audio engineer—and obviously I do not work at Apple, so there is probably some other secret sauce they’re pouring on to effectively simulate directional sound, but this is the basics of what I found in my research and heard from other engineers.

Also important to note, as usual, Apple didn’t invent this! They just have the partnership with Dolby, and a great marketing team. Sony has their own audio format called 360 reality audio, and gaming headsets have had similar tricks—usually thanks to downloadable Windows drivers.

To wrap this up, let’s get back to the buds.

Neither is a walk in the park when it comes to repair, but the real bummer is that even though both of these buds have relatively accessible batteries, you’ll have a hard time putting either one of them back together.

You can smash the two halves together, but they won’t stick unless you were extremely careful opening them to save the delicate inner edge, and even then you’ll have to painstakingly remove the old glue and replace it with new glue.

The Beats Fit Pro earn a 0 out of 10 on our repairability scale,

And the 3rd generation AirPods earn a 0 out of 10 on our repairability scale.

And that’s a wrap on these buds! Not my favorite earbuds, by a long shot. Happy to be done with these. We’ll be back soon with a fairphone teardown for you, and in the meantime, check out our video on Apple’s huge repair announcement earlier this week. 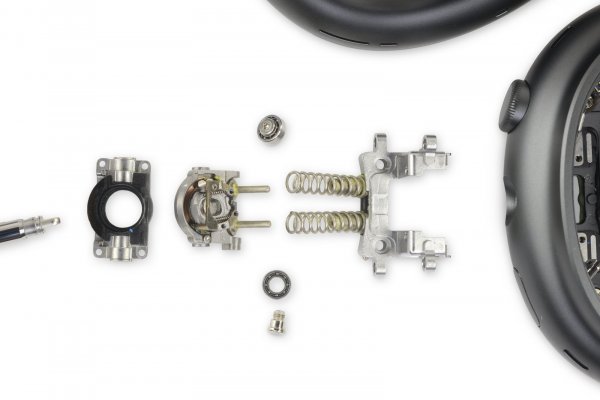