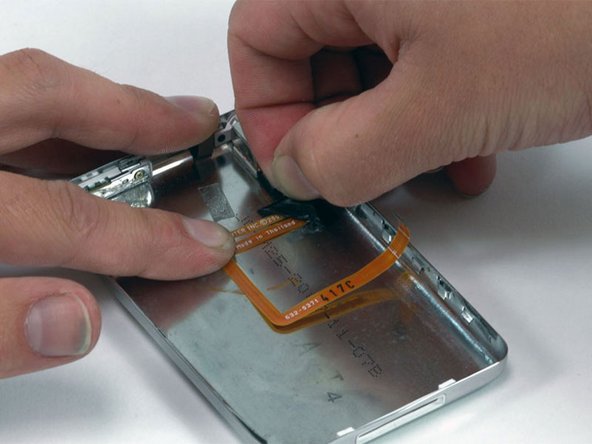 No audio? Replace the headphone jack!

Unable to unlock? Replace the lock switch, which is an integral part of the headphone jack sub assembly.

Before you snap the case shut, be sure to test the device to ensure that it's working properly.

Before you snap the case shut, be sure to test the device to ensure that it's working properly.

This worked a charm for me! If you take it slow and steady, and keep all the warnings in mind, you shouldn't have too much trouble :)

just wanted to say a big thank you to the guys/girls at ifixit for the guide my ipod classic is working better than ever!!!

where do you buy new headphone jack?

check this guy I used dollar store xacto blades you got to be careful you can easily cut yourself but this method wont damage the clips or anything,

works out perfectly for me! 3.5 hours, a lot (A LOT) of patience and attention. Didn't break or bend anything; now my ipod is working again. I'm very happy!

just a note: everything has to be done slowly and with no distraction. Take your time and deep breaths

Excellent, my ipod is now working like new, after a year without it when a faulty headphone get broke inside it.

in fixing one of my faulty Apple products. HUGE THANKS for having this forum and offering help that would otherwise cost far much more! Power to the people and those who help each other to help themselves!

Yes this guide does work. The plastic tools are pretty useless. They break. I used a paint scraper and small flat head screw drivers. Top tip is to test the headphones before you re-close it. I did this and found that the left headphone was not working. I found the problem was the connection at step 20. The lead is pre-bent to fit snug. Once I taped it flush to the wall of the case I had both speakers working. To find out how to re-close the ipod watch this video https://www.youtube.com/watch?v=dmEVVLSR....

Did it successfully!! Just be patient and you need to be to rough to break anything, because I have big hands and is a little difficult to work with those little parts. But is no that hard, the harder steps were the ones to separate the front face from the rear face.

I was able to follow this tutorial without too many issues. The problem is that, once it was apart and "repaired," there weren't really any instructions on reassembly. "Follow these steps in reverse order" doesn't quite seem sufficient. In trying to reattach the ribbons, the orange battery ribbon came unattached, and the pictures aren't enough to make it clear where it should go. Any suggestions?

Hi ! Mine was almost impossible to open but once I manage to get in everything worked very well. Thank you ifixit for transforming a 350 CHF reparation into a 40$ one you guys rocks. (only thing is that all the border of the ipod now look like he fell from a plane but he works well so ....)

apart for some issues with the connector on the headphone jack (it was bent and therefore caused distorted sound) all went fine. Lifesaver. Thanks Ifixit!

i just replaced mine and still no audio and no hold

i did everything acording to what i watch online like this tutorial is there a bug?

how do you know if its a thick or thin ipod? and does it matter

You're better off with the metal spudger when taking out the battery. My plastic one broke while attempting to remove it, however it came right out once used the metal one

Very straightforward process when you follow the instructions carefully. Thanks for the step-by-step, as well as the quick shipping of the parts.

I'm just wondering how to decipher/ID my iPod for the thick and thin headphone jack/switch part options that are available to purchase. My iPod looks like the one in the image, but I'm uncertain which of those two choices (thick) or (thin) that would be. Anyone have any ideas for me? Thank you much for any help

Since you guys seem to rarely have any of the parts in stock, is this headphone jack and switch the right kind? https://www.amazon.com/gp/product/B00QSI...

Thanks for a nice and clear guide! Had it done in about 45 minutes. A set of little craft knives had the case off straight away with no clips bent :)

Hi everyone ! I changed the jack connector and the hold button both with the rear panel (because i have a second broken iPod classic) and after that an error display on the screen. If someone have same problem and probably an issu to fix that i'm interesting ! Thanks a lot for this tutorial !

Well I successfully change the battery and my iPod classic but I don't think I plugged the headphone jack in properly so I will need to go back in tomorrow and figure that out. I have no volume through my headphones.

I did a great job replacing my Battery. A few little marks from the putty knife i used but managed to just file down a bit. Smooth as ever. Took it apart today to attach the headphone jack ribbon because i had it upseide down on accident. I went from no sound to sound only in my left ear. Even with glasses, i have a really hard time getting the headphone ribbon in place. I need a really clear image close up that can help me. Any suggestions, guys?

The instructions were on point and I had no issues. I was able to complete this repair in about 30 minutes front to back. Thanks for giving my iPod back :)

The instructions were great. I also had no issues. I did take my ipod apart prior to getting the part. That way I had an idea of how things would go apart and together. I also ordered the ifixit kit of tools so I wouldn't be running around to find the exact tools. Also having the kit enables me to fix some other ipods and whatever. So Bravo on the instructions. It is nice to have an ipod that is not locked up..!!

Excellent guide! Luckily my Ipod was super worn and old, so taking off the casing was easy peasy! one word of advice though : MAKE SURE YOU HAVE THE RIGHT SCREWDRIVER! I stripped one of those tiny interior screws and it was a huge hassle to pry it out.

amazing instructions, thank you!! i’m so excited to have a working ipod :))))

really great guide and everything has worked perfectly… however I’m Having trouble reattaching the orange headphone jack ribbon to the flip up plastic tab. It won’t attach like I’ve seen on YouTube nor as easily as suggested here. To disconnect I followed the instructions, lifting the tab then gently pulling it away.

any suggestions please on how to secure the ribbon in place on the contacts as I’m worried it will be too loose.

Great tutorial! I was able to follow it and managed to replace the headphone port on my 160GB iPod Classic.

I don’t know if I did something wrong, but for some weird reason, the hold button doesn’t work?? Did I get the wrong one by accident?? I bought the thin version, should I have bought the Thick version instead? What is the difference between the two?

Great tutorial! Worked well. Only thing is the plastic opening tools I got with the replacement jack didn’t work worth with a $@$*. They snap and smudge. Precision screwdrivers that come in an eyeglasses repair set work better. The flat head ones are more durable and thin enough to pop the sides open better. They also work well to use in the internal components as well. You can get a set for a dollar at a Dollar General store.

This tutorial was the shiznit. THANKS! Used wifes wooden cuticle thing as the spudger…… its ok.

I've worked in many small electronic devices but this tops them all. I'm going to give it a try but I need to download all my music first ….in case I mess up terribly. Great presentation and I hope I can do it proud! Stephen

I just changed my headphone jack and my battery ! The opening wasn’t succesful with this tutorial, but i followed Elite Obsolete’s one on youtube and it worked ! Thanks Ifixit ! Ipod is working fine now !

Fantastic! My Ipod classic headphone jack started to show its age and wear, and at some point was outputting only on the right side… luckly enough ifixit has this spare part! Opening the ipod was a task of inifinte patience and care, but after the unit was open, replacing the headphone jack/hold switch block was super easy and uncomplicated.

Now the Ipod is back in shape, and music is blasting again both my eardrums!

I have part of a head phone jack stuck in the Headphone jack port.

Can this be repaired? Is this s repair job for Apple engineers?

I have an I pod Classic.

I have managed to get part of a head phone jack stuck in the headphone jack port.

Can this be repaired/ Is it a job for Apple engineers?