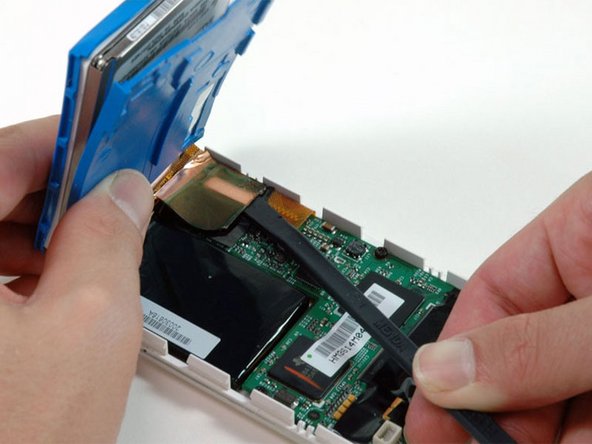 Battery not lasting long? Swap it out.

If you are real careful you don't have to remove the Torx screw to get the battery out.

I found this quite easy. The tools worked great. I agree with Andy, if you push the tool into the groove, then lift or pry it up so the tip of the tool is down inside the back cover, you should be able to slide it across to pop the clips quite easily. Once you get the first two sides open, it goes quick.

I also did this without having to remove the Torx screw. It helped to lift the battery up a bit to give the wires a little slack, and then just feed them around the corner of the motherboard. Putting the new battery in, I just fed the wires around the corner, and used the opening tool to push them the final bit of the way around the corner.

My old iPod is like new now! Hours and hours of battery life, when it would previously die after 5 minutes.

Changing the battery was simular to when I changed the HD in the same iPod. Quite easy. No need to remove the torx screw, Just be sure where the (lock) button (on the top) is when you close it, this time I didnt forget, as I did replacing the HD :)

I managed to bend the casing out when opening, but bent it back in shape after re-opening. The bend was small, but noticable. Worth reopening it.

One issue - the battery doesn't fully recharge in one go. I have to reconnect the iPod to get it to full charge.

Very simple and clear guide. I managed to replace the battery in the first try and it worked!

I was able to do it without disconnecting the headphone jack and without removing the Torx screw.

I found the replacement battery to be a little thicker than the original battery but there was no issue resealing the case.