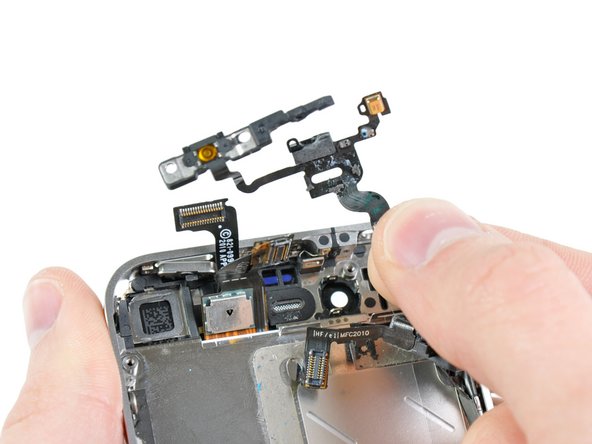 Be careful removing the headphone adapter, the ribbon is very easy to rib with the metal brace beneath it.

Thank you very much for the, it has been very useful for my to change the power and sensor cable.

You are doing a very good job in this web.

Now this is more helpful, than the power button repair guide that they gave us. This one still kind of leaves me hanging on how I'm supposed to put the silver button back into the hole so that it makes contact with the orange dome(aka the powerbutton).

I replaced the Home button and the Power & Sensor cable, along with battery. Let me explain some caveats with ifixit's parts (OEM Apple parts):

-The power-sensor part does not include a new gasket/filter for the sensor- recommend tweezers and care.

-The power-sensor cable needs the foam pad transferred with the adhesive- extreme care with removal.

-IF the power button isn't working it is likely the cable, not the button.

-It took me an hour (I had to get up and walk away...frustration factor high with the delicate flex cables and adhesive). Lit magnifier is welcome. Definitely use a spudge stick.

-I broke 2 of the 4 shield/antenna tabs that you need to tuck down from the speaker on re-assembly. I didn't force them, but so easy to press too hard in seating the speaker.

- I do repairs on a grounded-ESD mat and wore wriststrap.

-Right screw on the power button brace is PITA to access...careful pressing on the display flex cables to access the tiny screw. Magnetize your bit!

Great guide and perfect web site. It is extremely easy to find what you are looking for and order the components you need.