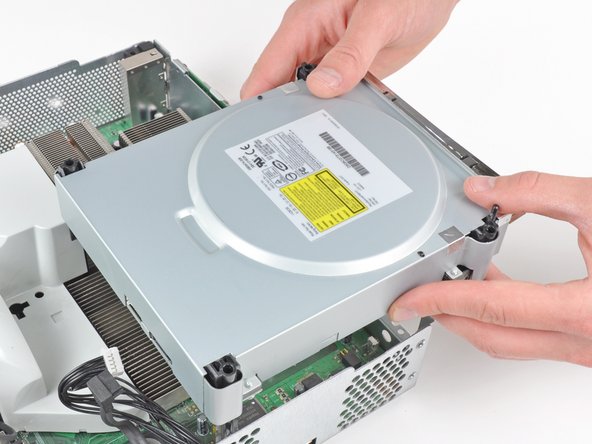 This guide only demonstrates how to remove the optical drive.

who knows xbox360 can use desktop drives?We have all kinds of drives,but i am not sure if it is fit for xbox360.

That has nothing to do with this guide. If you have any question regarding this equipment, go to the answer section.

General comment, you make no mention of removing the PCB from the DVD drive if it's being replaced. Any particular reason for that?

Not entirely accurate, that statement.

Having fixed a PS3 blu-ray drive by following the excellent guide on here, tried the same technique.

I had a bad drive in my xbox, and I replaced it with a new drive (of the same type). I took the daughter-board from the faulty drive and transplanted it to the good drive. It involved stripping down both drives, disconnecting 2 ribbon cables and unsoldering about 8 wires, transplanting the daughter-board - and resoldering the wires. Then reassembling. It worked for me, anyway.

I did this once on one of the newer 360s that are more basic, with help from someone , using scissors.

I am getting the famed red ring of death now...it there any troubleshooting I can do to fix this? I followed all steps and made sure that each wire mirrored the old unit.

you actually can swap the drives out pretty easy. you just rip the key off of the old drive and flash it on the new one. you have to make sure you purchase the same drive model and the use jungle flasher. would they allow an extraction and flashing guide on here? and while you are at it, you can mod them pretty easy as well ;)

How come you do not have the instruction for replacing the laser?

How come Ifit it does not have intructions for replacing the XBOX360 LASER?

No instructions on how to replace the PCB or what kind of drives there are?

So easy a GIRL can do it! Thanks!

This guide is incomplete thus the pictured console wont work upon drive replacement. Please finish the steps for flashing for they are a very required step in replacing the drive at all.

Author just ended the repair when there were more steps needed lol. I have done so many of these repairs and it shouldn’t be in the difficult section. If the PCB is ok, just swap it into a different drive deck you know that works. If your PCB is broken , you will need an X360 USB Pro and 3rd part software to extract the key and flash it and original firmware to the new PCB. I should update this tutorial for it is pretty weak.

What kept you from fulfilling your proclamation?

I realize my 360 is old but I cannot afford to replace it with the one. I replaced the dvd drive and same wont read problem, so I swapped the old board with the new and verified it is the board that is bad, not the drive itself.  Now what do I do? Give up and scrap it? How expensive is the fix to replace the board? Are the parts still available? Im not concerned with the technical difficulty.

This guide sucks. He says you cant swap the disc drives without the logic board or it wont work. Then proceeds to swap the drive but doesnt actually show anything about swapping boards too lol

So people will follow this guide and miss a huge key part, thus ending with a nonworking disc drive lol

It's right there in the header section. It literally says that this guide is ONLY about taking out (and in reverse order putting back in) the optical drive and that, for a new drive to work, it wont work without extra steps. So only very inattentive people will end with a nonworking drive.

But instead of contributing and adding a corresponding guide on how to exchange the logic board in the drive you chose to nag and have a whinge.