Repairing a Kenwood Chef A901D That Emits a Burning Smell 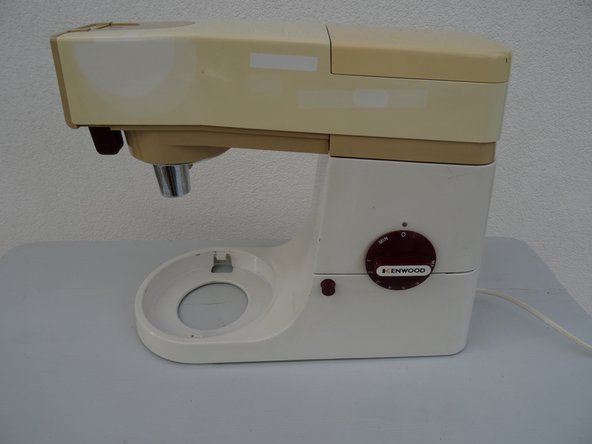 If your Kenwood Chef A901D starts emitting smoke and a strong burning smell, most likely a capacitor in the motor controller is broken. Follow this guide to change the broken parts in a Kenwood Chef A901D. To do this, you need some skills in soldering. If you are new to soldering, our guide may be useful.

After adjusting the speed control, follow the steps in the reverse order for reassembly.

After adjusting the speed control, follow the steps in the reverse order for reassembly.

I need help. I changed the capacitors ,the resostor snd the triac, but the motor will not start. i have supply on the pink wire too. after some time the motor starts and stops. checked all the diodes found ok except one which i have changed. any ideas what i need to check? brushes ok too. can you please send me on jusmar1@hotmail.com

To detect the issue:

1- Try to shrot the main switch and the main thermo protection.

2- Try to bypass the dimmer circuit. by removing the triac from the circuit. Then short MT1 and MT2 place of the triac.

go to my instructables and find out the schematic.

@SoubhiF: Your guide ist great! Thank you for sharing.

Excellent instructions and it all worked for me and saved our old Kenwood. Bought it back in 1988 now working perfectly after replacing the Diode, 2x Capacitors and resistors with the motor brushes. well done and thank you. Mike Baggot 26/04/2020

I'm lucky I could help ! Greetings from Germany.