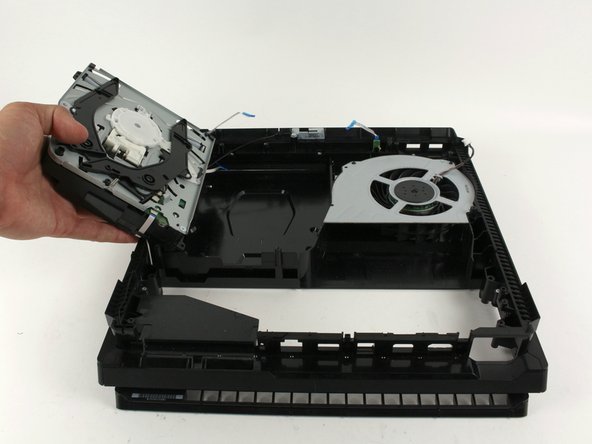 This guide includes the steps necessary to remove the optical drive in the PlayStation 4 Pro. This is one of the last things that is removable in the PS4 Pro, which means that just about everything else has to be removed first. This guide includes a large amount of disassembly, as well as warranty-voiding steps.

I called an “expert” and they said buying a new drive wont work. I would have to buy a whole new mother board as well…

I’m currently trying to find a replacement Optical Drive for my Ps4 Pro myself. Apparently, This is really hard to find. Managed to find a used one but the price to me seems a bit high at $123.

Excellent instructions just saved me a lot of dosh. I would recommend using Phillips #00 where #0 is noted however - worked better for me.

Forgot to say that I my drive was fine once I fished out the two Switch cartridges my 3 year old had posted in there! Obviously wanted to play Zelda on my PS4 pro - if only.

I had to open my optical drive up as a sticker had come off a disc and was lodged in there. Discs were going in and being ejected fine but would not read.

I opened the optical drive up and removed the sticker. Now when it's all back together and the console is running it won't accept a disc, the disc won't even go in far enough to trigger the motor to pull it in.

there a certain position the mechanisms should be in when re-assembling?

Did you solve the problem?

Not myself. I had it repaired by EB Games.

pro and slim have the same bluray?

I have a PS4 pro and have been having an issue where the drive will keep starting to spin with the characteristic ps4 whine, then stop, then start spinning again, then stopping, etc. until the system finally displays the unrecognized disc message.

After a couple attempts at fixing the drive, I decided that it must be malfunctioning, and needed to be replaced. I ordered a new drive and installed it. Unfortunately, the new drive is exhibiting the exact same issues.

So now I'm thinking it is not an issue with the drive itself, but don't know what else I can do to correct this problem. Does anyone have any suggestions?

Awesome instructions - just used to remove a sticker which had come off a dvd and got lodged in the drive. I couldn't find anywhere online what the best pattern is to place the thermal compound on a PS4 pro, but have used vertical stripes across the shortest dimension on the chip and it seems to be doing fine.

Thanks again but please add a bit at the beginning warning that you will need thermal compound etc to complete fo others.

I suspect i placed my CD into the drive upside down, which is why the disk is unreadable. It is also not ejecting as there is no disk recognised. Tried the manual ejection and it has not worked so i think its stuck inside. My question is, can i remove it with force (E.g. Taking tweezers and pulling it out) or something like that or does it need to be opened ? I don’t know why it is stuck it should come out with manual ejection.

Hello, I got a new drive, followed all instructions. Now the optical drive doesnt power on. Tried the old drive which use to power on and now it doesnt either. I was very careful (I am experienced enough with repair to know about ribbon cables and the delicate locks) and did not break anything. What else could be the issue? I have 10x checked and cleaned the drive’s ribbon connectors. I just dont know why they dont get power now?

You are the best!!