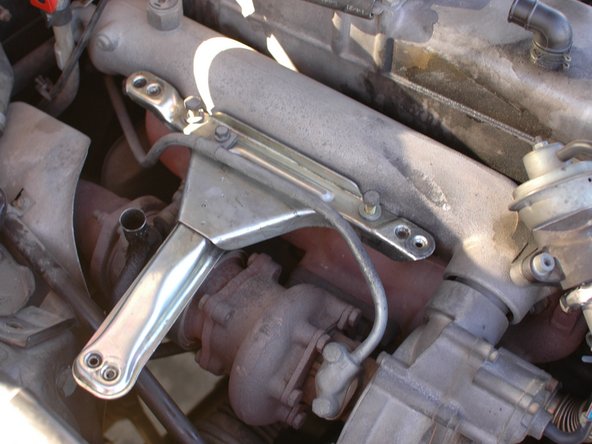 The design of the W123 air cleaner bracket on the turbo OM617 engines leaves a lot to be desired. It's too thin of a metal to hold up to the heavy weight and harsh vibration seen by the air cleaner sticking out over the turbo.

The primary fault that comes up for these is that the bracket breaks at the back end, as you'll see in the pictures below.

When you're done go for a test drive and then check to see that everything is still tight.

When you're done go for a test drive and then check to see that everything is still tight.

I understand that there is also an ad on fool proof bracket. where can that be found?

Where does one find an ad-on bracket for a 123 model Mercedes 300 turbo diesel air filter housing?

Where can I find the ad-on air filter bracket for a Mercedes 300 turbo diesel ?

This is an O.K. DIY how-too but I was hoping for some way to improve the bracket, I even tried buying the M-B one ( ! $ !) and it broke just as quickly as the used and aftermarket ones do .

I cannot quite get the bracket loose unless I undo the two 13MM ATF bolts attaching the turbo oil supply pipe ~ BE CAREFUL re inserting these as they’re easy to cross thread .

I find it easiest to install that underneath 8MM bolt by putting it in a shallow 3/8” drive 13MM soccket with a kunckle and a 6” extenstion, I assemble this to the bracket and lower it into place and begin the under bolt first ~ as soon as I feel the threads catch I stop and insert the other two bolts .